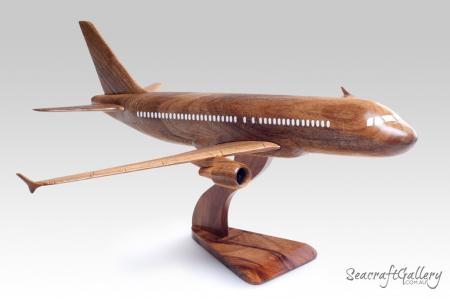 Seacraft Gallery presents to you the authentic replica of Airbus 320 with historically correct details. This model is hand carved from solid mahogany by skilled craftsmen and not constructed from kits. After passing through several stages of sanding and priming, multiple coast of clear lacquer are then applied into Airbus 320 model to reflect the true beauty of natural wood and for an overall glossy finish. This model will be a special gift for your loved ones or a timeless display on your office desk.

The A320 is perhaps best known as the first airliner to introduce a fly-by-wire flight control system – where control inputs from the pilot are transmitted to the flying surfaces by electronic signals rather than mechanical means. Apart from a small weight saving, the advantage of Airbus’ fly-by-wire is that as it is computer controlled, an inbuilt flight envelope protection makes it virtually impossible to exceed certain flight parameters such as G limits and the aircraft’s maximum and minimum operating speeds and angle of attack limits. Also integral to the A320 is the advanced electronic flightdeck, with six fully integrated EFIS colour displays and innovative sidestick controllers rather than conventional control columns.

The A320 also employs a relatively high percentage of composite materials compared to earlier designs. Two engines are offered, the CFM56 and IAE V2500. The A320 program was launched in March 1982, first flight occurred on February 22 1987, while certification was awarded on February 26 1988. Launch customer Air France took delivery of its first A320 in March that year. The first V2500 engined A320 was delivered to Adria Airways in May 1989. The initial production version was the A320-100, which was built in only small numbers before being replaced by the definitive A320-200 (certificated in November 1988) with increased max takeoff weight, greater range and winglets. The stretched A321 and shortened A319 and A318 are described separately. All four share a common pilot type rating. Mid 2000 A320 family production was at a monthly rate of 22, to be increased to 30 units a month by the end of 2002.

Be the first to review “Airbus 320 Aircraft Model” Cancel reply