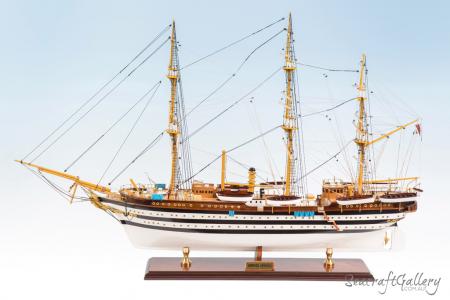 Looking for the ideal ship to include as part of your collection on display? Then why not take a look at a ship that was named after one of the most famous explorers of the era? The Amerigo Vespucci is a deeply popular ship in history and has become a popular choice for collectors and fans of naval history.

This ship itself was built as a school ship, making it the ideal model to showcase if you are looking for something historical and educational to display. We’ve hand-crafted this remake of the Amerigo Vespucci to ensure that it looks as close to the real model as is possible. Every effort and care has been taken to ensure authenticity, realism, and historical accuracy in every last section of the ship model itself.

It would be more impressive to display your Amerigo Vespucci model ship in a hardwood & perspex display cabinet specially designed for tall ship replicas.

About the Amerigo Vespucci

When the Regia Marina ordered two school ships to be built in 1925, they were to be inspired by old-school 18th century ships of the line. The first ship of the line was the Cristoforo Colombo, but the second was the Amerigo Vespucci. Built in 1930, the ship was built at the Naval Shipyard of Castellammare di Stabia in Naples. It launched in late February, and was in service by July of the same year.

The ship, a fully rigged, three-masted ship with a 270ft long hull, was immediately seen as one of the most interesting ships built in recent Italian history. With 26 sails in total, too, it was capable of reaching speeds as high as 12 knots. The ship soon proved itself as a ship of genuine repute. Known for its beautiful colour scheme – black, with two distinctive stripes – the boat stood out from a mile away. It also carried a life-size figurehead of Vespucci himself. With a crew of 16 officers and 190 sailors alongside 70 non-commissioned officers, this is a boat that has ample room aboard. The crew would total as high as 450 when taking on various summertime academy expeditions.

The ship itself served mostly throughout its life, with the Second World War being one of the only times the ship has not been regularly active. She generally takes part in training cruises in Europe, though has been used for both North and South American journeys as well as Pacific navigations. In 2002, the Amerigo Vespucci was put to work to take on a full trip around the world. It also has a proud racing history, with a long-running rivalry with the Gorch Fock taking place in the Tall Ships’ Races. Public tours of the vessel are available when the boat is docked at one of the many ports in Europe that it arrives at.

While it has no military history, the ship itself has long been seen as an interesting example of modern Italian nautical hardware. While it might not have the songs and stories of wartime conquests like other ships, the Amerigo Vespucci has very much claimed its position in the pantheon of Italian nautical developments regardless.