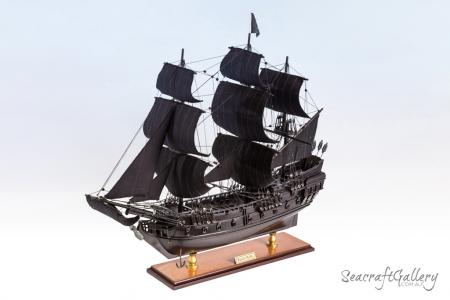 Nigh uncatchable, so the legends say, The Black Pearl is based on the Sunset, the ship used as its proper during filming. Its distinctive all-black look makes it stand out (during the day) and spends much of its time plundering in the darkness. Its speed and power are noted, though, such as when it manages to outrun more or less any ship in the entirety of the movie series. While part of that pace is supernatural, it’s also down to the sheer number of sails that The Black Pearl adorns. We’ve made sure that this recreation, a full design of the famous Pirates of the Caribbean ship, stays true to the source material. While the famous Jack Sparrow may not be aboard, this Black Pearl model ship is one of our wooden model ships from a more creative, fantastical perspective. If you are looking for a wooden model ship with a fictional edge or simply love to collect uncommon ship replicas, this is an ideal model to start with.

The model is also available in bigger size 75cm.

The Black Pearl is a very interesting ship, with a rich history in the series. It was produced as a merchant ship known as the Wicked Wench and was mostly used as a safe trading vessel. However, during a battle with Captain Armando Salazar, the ship’s captain, Captain Morgan, was killed – and so Jack Sparrow took command. Owned by Cutler Beckett, the ship was put under the command of the East India Trading Co. once again, before Sparrow managed to take it for himself. The ship, then, became one of the most important parts of the life of Sparrow and his crew. From helping them to find the legendary Chest of Cortes to Aztec gold, the ship managed to get through major scrapes more than once. It even managed to take on other legendary boats, including The Flying Dutchman. Take one look at this splendid ship model, and you’ll see why it is so popular.