View cart “Classic Helicopter Model (Medium)” has been added to your cart. 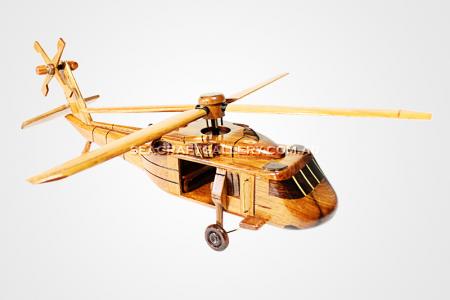 Perhaps one of the most famous helicopter models ever flown, we offer you an authentic wooden replica of the famous Blackhawk UH-60 helicopter, featuring meticulous historically-accurate detailing.

This mahogany model is hand-carved by skilled craftspeople, not constructed from a pre-existing kit. In order to accurately depict the true impressiveness of a Blackhawk helicopter, we use several coats of lacquer after sanding and priming the model carefully. This ensures an impressive and glossy finish which mimics a real Blackhawk UH-60 and looks great in any display case!

History
The UH-60 Black Hawk is a four-bladed, twin-engine, medium-lift utility helicopter manufactured by Sikorsky Aircraft. The UH-60 entered service with the U.S. Army’s 101st Airborne Division in June 1979. The U.S. military first utilized the UH-60 in combat during the invasion of Grenada in 1983, and again in the invasion of Panama in 1989. During the Gulf War in 1991, the UH-60 participated in the largest air assault mission in U.S. Army history with over 300 helicopters involved.