View cart “Classic Helicopter Model (Large)” has been added to your cart. 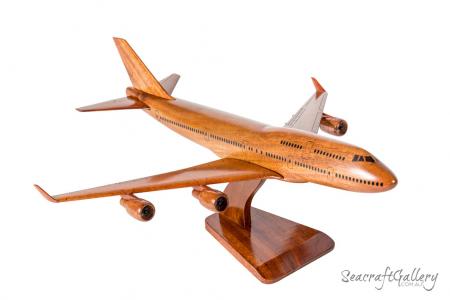 Seacraft Gallery presents to you the authentic replica of Boeing 747 with historically correct details. This model is hand carved from solid mahogany by skilled craftsmen and not constructed from kits. After passing through several stages of sanding and priming, multiple coast of clear lacquer are then applied into Boeing 747 model planes to reflect the true beauty of natural wood and for an overall glossy finish. This model will be a special gift for your loved ones or a timeless display on your office desk.

The Boeing 747 is a wide-body commercial airliner and cargo transport aircraft, often referred to by its original nickname, Jumbo Jet, or Queen of the Skies. It is among the world’s most recognizable aircraft, and was the first wide-body ever produced. Manufactured by Boeing’s Commercial Airplane unit in the United States, the original version of the 747 was two and a half times the size of the Boeing 707,one of the common large commercial aircraft of the 1960s.

First flown commercially in 1970, the 747 held the passenger capacity record for 37 years. The four-engine 747 uses a double deck configuration for part of its length. It is available in passenger, freighter and other versions. Boeing designed the 747’s hump-like upper deck to serve as a first class lounge or (as is the general rule today) extra seating, and to allow the aircraft to be easily converted to a cargo carrier by removing seats and installing a front cargo door. Boeing did so because the company expected supersonic airliners (whose development was announced in the early 1960s) to render the 747 and other subsonic airliners obsolete, while believing that the demand for subsonic cargo aircraft would be robust into the future.

Be the first to review “Boeing 747 Aircraft Model” Cancel reply