View cart “Pirates of the Caribbean – Black Pearl pirate ship 50cm” has been added to your cart. 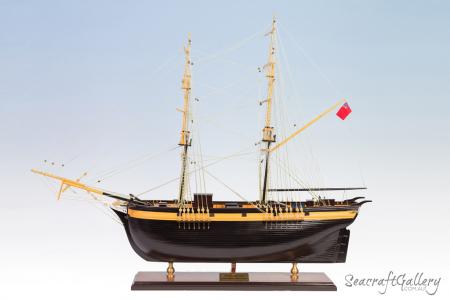 This is a gorgeous museum-quality model of the Brig Amity. She carried the party which established the first British settlement in Western Australia. This party, under the command of Major Edmund Lockyer, landed near this spot on December 26th 1826.

About the Brig Amity

Western Australia’s colonial history began with the arrival of the Brig Amity in Princess Royal Harbour in 1826.  Under instructions from the British Government the Amity brought the first European settlers to the Albany Region shores to establish a military post.

The Brig Amity set sail from Sydney on 9th November 1826, carrying a party under Major Edmund Lockyer to form a settlement at King George Sound which on the 21st of January was named Fredricktown after the Kings brother. After a difficult voyage, the first half battling through heavy weather in Bass Strait and the second enduring the summer heat of the westward run, the brig reached Princess Royal Harbour on Christmas Day 1826 moored then they went ashore Boxing Day.

The settlement party comprised the commandant Major Edmund Lockyer, a captain, surgeon, storekeeper, 18 rank and file soldiers, and 23 convicts, mostly tradesmen. Also on board were the vessel’s own crew and a naval party comprising Lt Colson Festing, a quartermaster, midshipman and a marine batman – and stores for six months, including sheep and pigs.

On 22 September 1829 Amity arrived at Fremantle from Singapore with passengers and crew totaling 15 people. She was the eighth shipping arrival in the fledgling Swan River Colony.

By 1844 the vessel was involved in the transport of cattle from Port Albert in Victoria across Bass Strait to Hobart in Tasmania. Amity was wrecked after running aground on an uncharted sandbar now called Vansittart Shoals near Vansittart Island, north of Van Diemen’s Land (later Tasmania) on 18 June 1845.

Captain William Marr was sailing Amity from Hobart for Port Albert in ballast on 14 June 1845, with a crew of nine, and one passenger. They encountered a gale while entering Bass Strait and ran aground on a sand bank twelve miles (19 km) off Shoaly Bay on the south-east coast of Flinders Island, presumably the Vansittart Shoals, 18 June 1845. As the ship broke up, she was abandoned, all making the island safely but in so doing, both boats were damaged. The castaways came across a party of sealers who loaned them another boat, and all except Captain Marr, who was later picked up by the schooner Letitia, headed for Cape Portland, Tasmania.