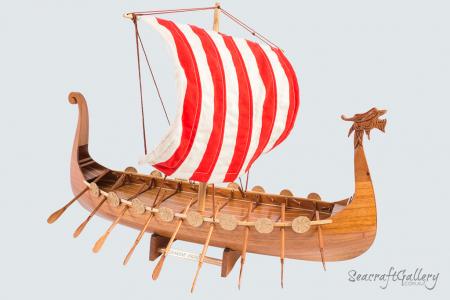 Providing the Vikings with dominance over land and sea from AD800-1100, the Vikings took over and formed what is now commonly known as the Viking Age. Their powerful transports acted as steeds of sorts, allowing them to transport and move their men around the continent with ease. Ships like the Drakkar would have been used to pillage, raid, and conquer like never before. This long, narrow ship is one that immediately stands out thanks to its shallow hull. This would allow for navigation in waters only 1m deep, allowing for the Vikings to access areas that their predecessors would have simply found too narrow. The use of oak on the hull helps to make sure it was strong enough to handle these tight, narrow locations. This also aided the ship in improving its overall mobility, allowing it to turn and reverse in a fraction of the normal time that this would take. All without turning around. The massive oars allow you to have a ship that would have space for a rowing team to move the ship, while the warriors prepared to embark on the land and take over. Capable of speeds as high as 15 knots, these were manpowered machines of war that would have allowed the Vikings to take over just about any location with ease. Their power and the incredible power of those who were aboard, then, made ships such as the Drakkar a fine example of why the Vikings are now easily seen as one of the most feared people ever to have sailed the seas of Europe.