View cart “Mercedes Coupe Car Model” has been added to your cart. 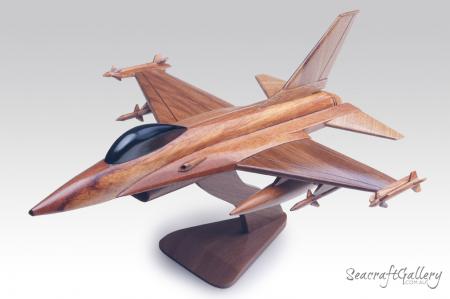 The General Dynamics F-16 Fighting Falcon is a multirole jet fighter aircraft developed by General Dynamics for the United States Air Force. Designed as an air superiority day fighter, it evolved into a successful all-weather multirole aircraft. The Fighting Falcon is a fighter with numerous innovations including a frameless bubble canopy for better visibility, side-mounted control stick to ease control while maneuvering, a seat reclined 30 degrees to reduce the effect of g-forces on the pilot, and the first use of arelaxed static stability flight control system that makes it a highly nimble aircraft.
The F-16 has an internal M61 Vulcan cannon and 11 locations for mounting weapons and other mission equipment. In addition to active duty U.S. Air Force, Air Force Reserve Command, and Air National Guard units, the aircraft is also used by the USAF aerial demonstration team, the U.S. Air Force Thunderbirds, and as an adversary/aggressor aircraft by the United States Navy. The F-16 has also been procured to serve in the air forces of 25 other nations.
Add to Wishlist
Add to Wishlist