View cart “Enterprise Yacht Half-hull 90cm” has been added to your cart. 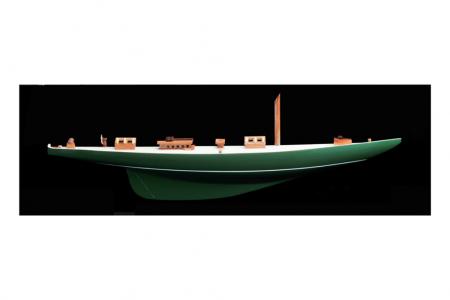 The Shamrock V half-hull yacht is a fine example of how enterprising half models can look. This looks brilliant when hung up on the wall and can be an ideal finishing touch to any nautical themed rooms at home or in the office. She’s a classy, timeless decoration that has been sanded, hand-painted and varnished to deliver the richest, most satisfying finish possible. With hundreds of hours of work put into this half hull boat, we make sure that whoever buys this is picking up a stunning tropical hardwood model. She’s a fine choice of gift, or to simply display anywhere you choose.

However, in race three, there was an actual race. While the Shamrock eventually blew its lead, via tackling duel. At this point, the main halyard of the ship became damaged and collapsed – giving her no chance in the fourth and decisive race, with Lipton proclaiming “I can’t win” in response. However, the Shamrock – and Lipton, to an extent – came up against the better boat and expert. Harold Vanderbilt was a legend of the racing circuit, and simply won due to his ability. Sadly, Sir Thomas Lipton died a year later, never fulfilling his dream. She then endured a nomadic existence, being sold to the likes of Sir Thomas Sopwith as a trial horse. She was then sold on across to other people such as Sir Richard Fairey, Mario Crespi and Piero Scanu. The ship was reborn under the ownership of Scanu, with the hull and deck being fixed up alongside modernising of the systems and the ship engines. In 1986, she returned to its original owner in the form of the Lipton Tea Company, when she was donated to the Museum of Yachting, Newport.