View cart “HMS Victory 55cm” has been added to your cart. 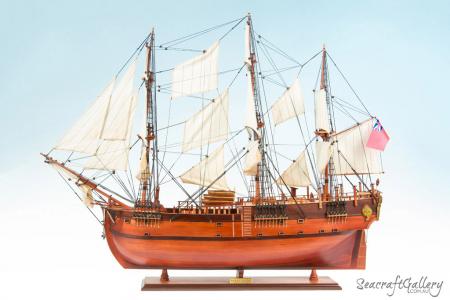 When it comes to importance, the HMB Endeavour ship (or HMS Endeavour) certainly sits high up on the list, given its role in world discovery. Under the command of Captain James Cook, this important naval ship played an essential role in the discovery of Australia. Across a nearly three-year expedition, this ship helped to chart an entirely new course for the world that we live in. As one of our most popular model ships, our new HMB Endeavour ship model helps to add much-needed elegance, eloquence and charm to the whole experience. This is a must-have take on the HMB Endeavour model ship range, also available in other sizes of 75cm and 45cm.

It would be more impressive to display your Endeavour model ship in a hardwood & perspex display cabinet specially designed for tall ship replicas.