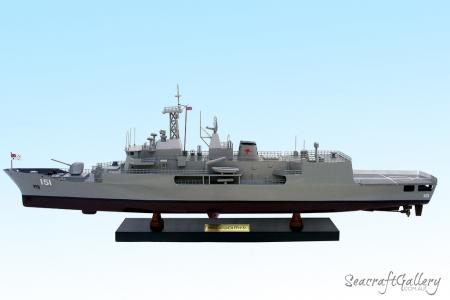 HMAS Arunta II (FFH 151) is the second of eight Anzac-class frigates built by Tenix Defence Systems at Williamstown, Victoria for the Royal Australian Navy. The ship Arunta named for the Arrernte people, came from the original motto ‘Conquer or Die’ to recognise the HMAS Arunta I ship’s proud history and special relationship with the Arrernte Aboriginal people of Central Australia. This hugely impressive naval ship was first launched in 1996, HMAS Arunta has undertook a wide range of duties, including border protection patrols in northern Australian waters, and several deployments to the Persian Gulf. If you would like to own a replica of this ship, you can do so with ease through our new model. It’s a fantastic introduction to any office or boardroom to show off the spirit of RAN’s modern military ship.

The HMAS Arunta is a very popular part of the RAN and has been for over two decades. It was first launched in 1996 and commissioned fully by 1988. It’s performed a wide range of services for the RAN. Its most common duties include border protection patrols in northern Australian waters and deployments as part of conflict in the Persian Gulf. The original HMAS Arunta was planned to be a River-class destroyer escort but plans soon changes. They instead came up with a warship that was far beyond what wasp previously thought capable of Australian engineering. They took on a proven design that was inspired by ships from abroad and developed something unique. Collaboration with New Zealand led to the joint development of some very impressive ships.

With a 3,600-tonne full load displacement, these were a huge upgrade on anything that either nation had beforehand. A maximum speed of 28 knots, too, was a fine example of how much this was capable of exceeding expectation. It was first deployed in terms of military use as part of the Tampa affair. It also took place in major operations, such as Operation Relex and Gaberdine respectively. It also took part in the Persian Gulf operations that Australia took on, working as part of Operational Slipper. The ship was used as part of UN sanctions against Iraq and operated extremely close to the Iraqi coast.

Since 2008, it’s been used for various purposes including helping to rescue Yann Elis, the yachtsman who was taking part in the Vendee Globe. Elies broke his leg in heavy seas and had to be rescued. The ship was given honours for its work in the Persian Gulf. As of today, though, the ship is mostly deployed in the Middle East as part of Operation Manitou.