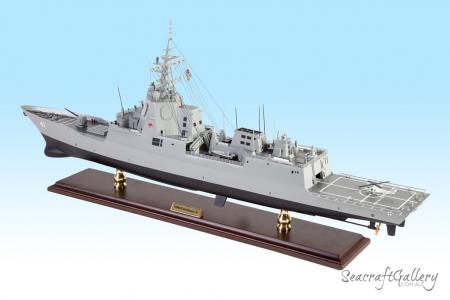 HMAS Brisbane (III) is the second of three ships of the Hobart Class guided missile destroyers which are constructed in Australia for the Royal Australian Navy (RAN). The ship was built at ASC’s shipyard in South Australia from modules fabricated by BAE Systems Australia in Victoria, and Forgacs Group in New South Wales. She was laid down on 3 February 2014 and commissioned on 27 October 2018.

We have designed this model to capture the real heart of the Brisbane III with exquisite details. The model is handcrafted from wood based on the imagery, plans, and stories of the ship to ensure that our recreation feels as close to the real thing. This model offers a must-have ship replica for collectors, historians, and military personnel alike.

HMAS Brisbane III is the second of three ships of the Hobart Class guided missile destroyers which are built for the Royal Australian Navy. The ship was laid down on 3 February 2014 and launched by Mrs Robyn Shackleton on 15 December 2016.

The Hobart Class destroyers are equipped with modern sonar systems, decoys, surface-launched torpedoes, and an array of effective close-in defensive weapons. These capabilities ensure that the Hobart-class guided missile destroyers have the layered defensive and offensive capability required to counter conventional and asymmetric threats.

HMAS Brisbane III is coupled with the Aegis Combat System, therefore, she will be able to provide air defence for accompanying ships in addition to land forces and infrastructure in coastal areas, and for self-protection against missiles and aircraft. She will also carry a helicopter for surveillance and response to support key warfare areas. The surface warfare function will include long range anti-ship missiles and a naval gun capable of firing extended range munitions in support of land forces.