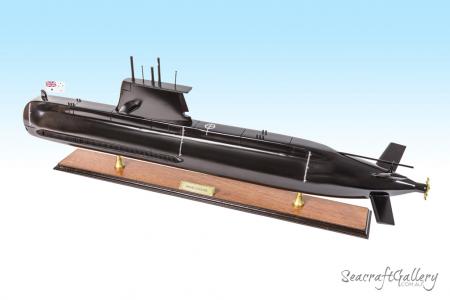 As one of the most important naval inventions of all-time, the submarine allows us to explore areas never seen before. It also allows us to spend more time under the waves, seeing the world from a whole new perspective. From a military standpoint, too, the submarine is a genius invention that changes the entire dynamic of naval warfare. Various submarine classes have existed over the years in the Royal Australian Navy; chief among them, though, is the Collins Class submarine.

One of these submarines is the 1996 model, the HMAS Collins SSG 73. This particular unit has become hugely respected since it was first laid down n 1990 and launched in 1996. It is still in service today, and plays a key role in offering support to the Navy. If you would like to own a replica of this beloved submarine, then our HMAS Collins SSG 73 replica would make the ideal investment for you today.

The history of the HMAS Collins SSG 73 Guided Missile Submarine

The HMAS Collins is the first of six submarines in the same class that entered into service for the Navy. They play a key role in providing defence capabilities to the country, and would be among the first vessels called into action if needed. It was launched in Adelaide, South Australia under the command of Vice Admiral Sir John Collins’s widow, Phyllis Collins. It was designed specifically with defence in mind, whilst also becoming a key part of ocean surveillance.

It’s extremely quiet, and was developed with assistance from the Swedish Navy who had previously worked on various generations of high-class submarines. Indeed, the HMAS Collins SSG 73 also stands proud as it was among the first submarines to be designed almost entirely with computer technology. It’s rated for having outstanding shock resistance and low indiscretion rates, making it a dream to operate for its staff. It also comes with excellent weapons firepower and discharge systems, making it easy to react when needed.

Using lead-free batteries for prolonged power, the batteries are charged using a diesel generator set that is installed onboard. In terms of its firepower, the HMAS Collins SSG 73uses a series of weapons which are aimed using its high-end sensors and a hyper-accurate computation system for pinpoint accuracy.

Mostly, the HMAS Collins SSG 73 has spent its time involved in defence operations and exercises, as well as serving as part of strategic directives. The ship takes its name from the famous John Collins, who is a major part of Australian naval history for his commendable efforts during te Second World War.

Today, the ship also bears the Maltese Cross which is commonly used for wartime naval service in the Mediterranean Sea, which is where Captain Collins had previously earned his name and his legendary reputation.

The HMAS Collins SSG 73 is regarded as one of the most important submarines in the Collins class, an essential part of national defence that has established its legend for many years to come. For Australians, knowing this submarine is part of the national defence program can provide peace of mind at any time.