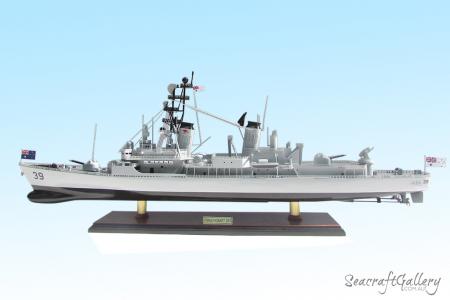 This naval vessel was named after the city of Hobart in Tasmania and is the lead ship of the Hobart-class range of air warfare destroyer ships. This is a key part of the modern Royal Australian Navy. For anyone looking to add a touch of military charm to their collection of ship replicas, the HMAS Hobart is a must-have We’ve designed it from the ground up to be the perfect addition to your ship collection. A modern recreation of a ship that was only commissioned in 2017. A fantastic addition to your collection of battleships, either for display or for personal storage and collection.

The HMAS Hobart is a vital part of modern Australian navy defence. These ships have become a major part of the naval warfare protection division of the RAN. Built at the ASC shipyards in Osborne, South Australia, it was a decade-long production project. Numerous delays and mistakes in the development of the ship meant that, while it was first ordered in 2007, it took a decade to be commissioned. The ship was first laid down in 2012, and launched in 2015. This Hobart-class destroyer as become a major part of the Australian naval force, though.

With a displacement of some 6,250 tonnes and a length of 147.2m, this is a very impressive ship. It’s scale, strength, and size make it immediately notable – especially given it has a top speed of 28 knots plus! Part of what makes the ship so special, though, is the inclusion nof the Aegis combat system. It’s powered with a fantastic range of radar and search radars, making it one of the most solutions for aerial protection from bombardment. It also comes with various sonar systems to help make sure that it can easily discover threats both above and below the waves. It comes with a range of launchers for various acoustic decoy and is armed with a range of Nulka decoy missile options. With a crew of around 186 and accommodation for up to 234 crew, this is a ship with incredible capacity.

Today, the ship is still involved in its first ever operational deployment. Today, the ship is being used as part of an RAN task group that is part of the North and South-East Asian searches. This began in September 2019, and at the time of writing is the only operational service the HMAS Hobart has completed. The fact it was made a flagship from its first service, though, shows the faith that has been placed in this particular model.