View cart “HMAS Canberra LHD 90cm – Flagship of RAN Fleet” has been added to your cart. 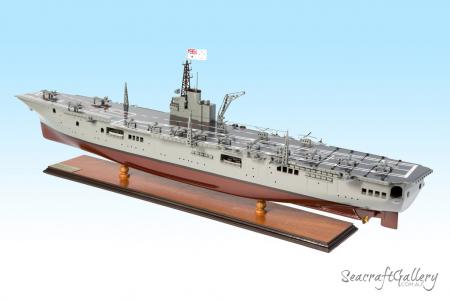 Australian naval history has been built upon aircraft that can serve in both times of peace and in times of war. One vessel that is a key part of both sides of Australian naval history is the HMAS Melbourne II. This ship was a crucial part of the Second World War response, a conventional aircraft carrier that carried out some pretty unprecedented things during its lifespan. From 1955 until 1982, the HMAS Melbourne II was a key aircraft carrier for the Royal Australian Navy.

If you would like to own a replica of this special ship, capable of carrying as much as 22,000 short tons at full load, then you can consider an Aircraft Carrier HMAS Melbourne II replica from our store today. This hand-crated model is designed to give you the ideal display point in any office, boardroom, or personal study. It’s the ideal gift for anyone from ex-Navy personnel to those with a love of all things nautical.

The History of the HMAS Melbourne II (R21)

HMAS Melbourne (R21) was a Majestic-class light aircraft carrier operated by the Royal Australian Navy (RAN) from 1955 until 1982. The vessel was laid down for the Royal Navy as the lead ship of the Majestic class and was launched in 1945.

The Commonwealth Government approved to acquire two aircraft carriers, including the Melbourne. The Melbourne II was the name given to the HM Majestic. The use of angled flight decks and mirror-deck landing systems made the Melbourne II a technical marvel for the era. Work continued through the late 1940s and into the early 1950s, ensuring that the Melbourne could retain all of the features expected of such a post-war vessel.

The ship was officially named and commissioned on 28 October 1955  into the RAN as HMAS Melbourne under the command of Captain Galfrey GO Gatacre. Then she sailed from Glasgow to Australia with a series of Sea Venom and Gannet aircraft fighters attached. It also stopped off in areas including Naples, Malta, and Gibraltar along the way. Arriving in Freemantle in 1956, the ship was regarded as a marvel by Australian forces.

In terms of military pursuits, the HMAS Melbourne took part in various engagements, including serving as part of the Far East Strategic Reserve and being deployed in the South East Asian region. However, the ship never fired a shot in anger during its career, serving in peripheral roles within the Indonesian-Malaysian conflict, and the Vietnam War.

A reputation for collisions with allied vessels as well as shipboard accidents and losses of aircraft led the ship to be unjustifiably claimed to have been jinxed during development.

The ship also played a role in a major humanitarian rescue. In June 1981, the Melbourne II and the Torrens were taking part in Exercise Starfish 81 in the South China Sea when they came across close to 100 Vietnamese refugees aboard a damaged vessel. The ships swooped in to provide aid, managing a rescue operation to ensure that everyone who was found during the trip could be saved accordingly.

A reunion ceremony was held for the rescue of the ‘MG99’ in June 2021, held at Albion Park, to celebrate the safe return of these stranded people. In 1982, the ship was suggested as being redeveloped into a floating casino, but this was rejected prior to being sold for scrap in 1985, towed to China to be broken down. Though it was never a key wartime vessel in terms of having a clear military focus, this was a ship that became famous for its humanitarian pursuits and technological advancements.