View cart “Sunseeker Murcielago Motor Yacht Model” has been added to your cart. 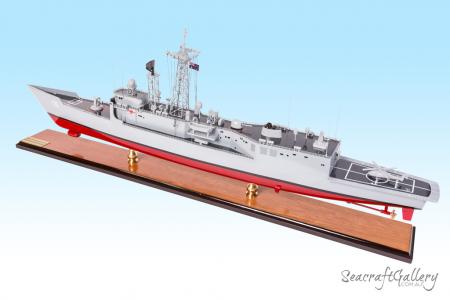 As one of the most popular names within Australian naval history, the name Melbourne has been used numerous times for various vessels. Chief among the most important names of the historical Australian fleet, though, is that of the HMAS Melbourne III. This was one of most important Adelaide Class frigates which was developed as part of the wider Royal Australian Navy. As a guided missile frigate, this was a long-range escort ship that specialised in providing sea-to-air defence, as well as being capable of both surface and undersea warfare capability.

It was built to help deal with various threats that could come from sea, air, and underneath the waves. The ship was a major part of the HMAS Melbourne III, and if you would like to own a replica of this famous ship then we sell a top-class recreation of this most famous of Australian military vessels.

The history of the HMAS Melbourne III (FFG 05)

The ship itself was commissioned alongside five sister ships to be powered using gas turbines. Combined with a new repair policy ensured that these ships would be more readily available than any other in Australian military history. They would also be provided with various propulsion units so that the ship could retain elite movement speed and function even in tight areas.
The ship itself was first laid down in July 1985, before being launched in May 1989 and remaining in service until October 2019. The ship was equipped with then state-of-the-art computer command and control systems, allowing for elite integration of its various weapons suites. This allowed for rapid deployment of weapons, ensuring the HMAS Melbourne III could react to any potential threat.
With space for up to 232 officers, too, this was a vessel that provided enough space for full operations to flow seamlessly. For the most part, the service record of the HMAS Melbourne III revolves around being part of the Gulf War, serving as part of the United Nations response to Iraq. It also played a key role in the Middle East conflict in 2010, 2013, and 2015, when it joined as part of the Combined Maritime Force to promote security and stability within the endangered region.
Part of what made the HMAS Melbourne III so spectacular was the capability of using the MH-60R Romeo helicopter. Space was specifically built on-board so that these helicopters could be included, further expanding the range and support power of the vessel itself. This ensured that it was capable of offering the kind of all-around support that was needed as the Middle East situation escalated further.
After close to 30 years of service, though, the time arrived in 2019 for the HMAS Melbourne III to be decommissioned and brought to an end as a service vehicle. This took place in October 2019, when the HMAS Melbourne III was taken to Garden Island, Fleet Base East, where it was decommissioned and put to rest for one final time.