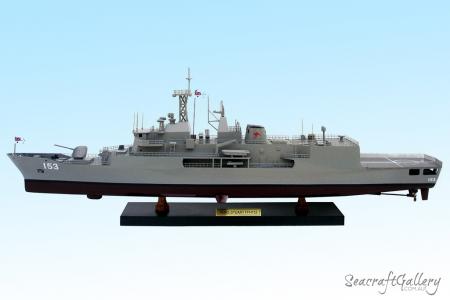 HMAS Stuart (FFH 153) is the fourth of eight Anzac class frigates built by Tenix Defence Systems at Williamstown, Victoria in 1998 for the Royal Australian Navy. Stuart is a long-range escort capable of various roles of air defence, surface, undersea warfare, surveillance, reconnaissance and interdiction. Since commissioning, HMS Stuart has participated in border protection operations, the apprehension of the North Korean flag bulk carrier the Pong Su and today the ship holds a special place in the hearts among previous users and fans of Australian naval warships. If you are looking for naval theme or Australia-pride décor for your household or place of work, start here. The HMAS Stuart is part of the famous Anzac-class frigate range. As such, naval enthusiasts and military fans will immediately notice the unique look and style of this ship.

Built by TENIX Defence Systems, the HMAS Stuart is a hugely popular frigate with good reason. It was built as part of a number of Anzac-class frigates as part of a joint agreement between the Royal Australian and Royal New Zealand navies. The frigate, despite only first being commissioned in 2002, was soon in action. As of 2003, it played a key role in helping to resolve the Pong Su incident. It was used to capture the Pong Su. This North Korean freighter was used for various drug smuggling operations. People were arrested on Australian shores in April, but the Pong Su refused to sail to the nearest possible port. When calls were ignored and New South Wales Police failed to detain the ship, the Stuart was deployed to handle the situation. It took part in a variety of launches alongside the police, and soon managed to catch up with the Pong Su 90 miles from Sydney. It was boarded and sailed over to Sydney.

In 2004, it also took part in what is known as Operational Catalyst in the Persian Gulf. When a small dhow was sent out to meet the ships, the USS Firebolt – assisting alongside the USS Yorktown – went to investigate. The dhow soon exploded, though, and boarding party members from the Firebolt were helped to escape. They then helped to fend off a range of other explosive dhows that were sent to attack the ABOT oil terminal.

In 2009, the ship took part in a ceremonial fleet entry and fleet review that took place in Sydney Harbour. The frigate was one of a group of 13 ships to take part in the ceremonial event. In terms of military operations, it took part in the 2011 Combined Task Force 151 event against Somali pirates in the area. They became the first ship to fire at anger against Somali pirates from Australia, when they opened fire on an unmanned skiff in March 2011. The most recent news regarding the ship was that it became the last of the Anzac-class frigates to undergo the Anti-Ship Missile Defence Upgrade. Work was completed in 2017, and the ship is again ready for whatever duties asked of it by the RAN.