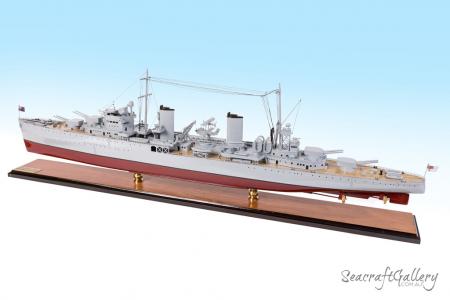 As a major piece of Australian aviation history, the HMAS Sydney II Cruiser is a piece of history well worth knowing about. The ship first was laid down in 1933 and became a major part of the Royal Australian Navy. Now, fans of military and seacraft history can pick up a lifelike scale model as part of our military collection.

This comes made entirely from wood, with no plastic used at any point. This helps to create a realistic and lifelike looking recreation of a vital part of Australian naval warfare. It was first ordered as part of the Royal Navy as the HMS Phaeton, it was soon renamed. You can now find out more about this stunning piece of history by using our new hand-crafted cruiser ship. This comes with immense attention to detail throughout and would make the perfect finishing touch for any boardroom, personal study, or gallery.

The HMAS Sydney has enjoyed a very interesting history. It was first ordered as part of the Royal Navy under the name of the HMS Phaeton. However, it was soon bought over by the Australian government and renamed prior to her relaunch in 1934 as the HMAS Sydney II. It served a variety of roles for the Australian government and played a crucial role in helping to strengthen their hand in the Abyssinian Crisis. However, by the start of the Second World War it now played a crucial role in helping to escort convoys and patrol the Australian waters. It joined an 8-month ship deployment as part of the British Mediterranean Fleet. Together, they helped to sink a series of Italian warships, and engaged in shore bombardments from afar. They also took part in numerous Malta convoys, with no casualties.

By 1941, it was back in home waters and returned to more standard convoy escort duties. However, the year of 1941 soon led to an intriguing situation. It was involved in a mutually destructive engagement with the Kormoran, a German auxiliary cruiser. Sadly, both ships were destroyed with all hand – 645 in total – on board. The wrecks of both ships were never found again until 2008, when it was discovered on March 17th. However, the fact that the Germans managed to escape most of their crew still alive means that the Sydney II has long been wrapped up in a conspiracy. The conspiracy is that the German commander had used illegal practices to draw the Sydney into range, and that there could even have been help via a Japanese submarine. Despite conspiracies that the ships destruction is part of a major cover-up, no real evidence exists to prove this the case. Regardless of how or why it was destroyed, the HMAS Sydney II cruiser was lost in 1941. It was to receive the posthumous honours of the Kormoran 1941 – one of the few battle honours handed out for sinking a single ship in the 20th Century.