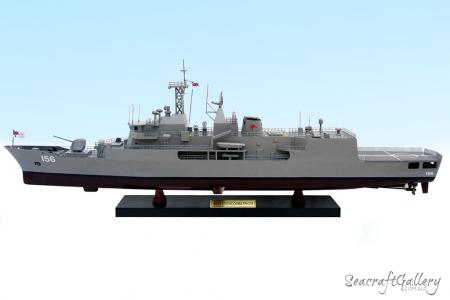 Launched in 2003, The HMAS Toowoomba is relatively a modern naval ship and is the seventh Anzac-class frigate of the Royal Australian Navy. She’s become a major part of their ability to help work successfully in key operations such as Operation Slipper. She’s also served as part of anti-piracy combatting programs and also engaged in deployments in the Middle East. This vital part of Australian naval history, then, is very much worth noting down and remembering. It’s become a major part of what we all recognise when we think of modern Australian naval protection. For anyone from the city of Toowoomba or merely who likes military ships, be sure to take a look at our brand new battleship model that you can pick up today.

As the seventh of the famous Anzac-class frigates built the RAN, this is a major part of modern Australian naval history. Laid down in 2002, it was put together by TENIX Defence Systems. Commissioned for the first time in 2005, for the 15-plus years since this ship has taken on various unique and challenging tasks. Her first deployment came in 2007, then, and was used for various roles. It made history as it became the first RAN warship to fire a MU90 Impact anti-submarine torpedo. It took part in various activities in the region but was soon moved on to other parts of the Middle East. One of the most common places you will have seen this boat, though, was as part of Operation Slipper.

It was also a major part of Australian involvement in the Middle East during the second half of 2009. It also served as part of Combined Task Force 151; a vital part of combatting piracy across the waves. As part of this program, it served various roles including escorting merchant ships and also conducting patrols of the International Recommended Transit Corridor. It also worked as part of Combined Task Force 150 as part of the Arabian Sea. One of its most potent acts, though, was to help out the BBC Portugal. The merchant vessel came under heavy attack in September 2009, and the Toowoomba swooped in. Boarding parties took weaponry from the assailants before sending the skiff on its way. The ship has also taken part in various roles, including taking part in the hunt for the Malaysian Airlines flight MH370. In early 2020, the ship was taken to the Strait of Hormuz. There, it took part in the 2019 Persian Gulf crisis.