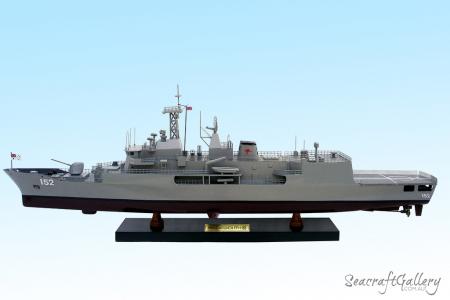 Looking to find a fantastic recreation of the HMAS Warramunga? Then look no further. The recreational model ship of HMAS Warramunga represent an important part of Royal Australian Navy’s development. Looks outstanding sat out on its own, or as part of a display case. Simply let us know where you intend to put this ship, and we can make sure that it’s stored and stacked away in the correct display option. The HMS Warramunga is a fine choice for everything from company boardrooms to staff rooms and even personal studies. An excellent addition to help show off your passion and love for military vessels, as well as make sure that you have some excellent and unique décor that you can lay out with ease.

The HMAS Warramunga has been part of the Australian naval scene since it was first laid down in July 1997. Since then, it has become a major part of the Royal Australian Navy. It takes its name from the Australian and New Zealand navies, one of ten ships in total built. It was laid down by TENIX Defence Systems in 1997, and by 2001 it was commissioned for the first time. Although activities today are far less diverse than they once were, the HMAS Warramunga has become very popular indeed.

She has served in many career highlights, including taking part in Operational Catalyst in the Persian Gulf. It’s also a major part of Australia anti-piracy engagements, combatting Somalian pirates on a regular basis. Its most common task involving this came in 2009, when it was used to help protect civilian vessels against Somali pirates. The ship was part of Combat Task Force 151, which focused mainly on the Horn of Africa and Somalia. In 2010, the ship took part in the RIMPAC 2010 multi-national exercises. It was used to show off the sinking of the USS New Orleans, which was now being de-commissioned. It’s also a major part of the Australian anti-ship missile defence program. it underwent a mandatory upgrade in 2014, bringing the hardware in line with modern expectations. This deeply impressive boat today sits active, taking part in various activities for the RAN. It’s most common uses today include combatting drug trafficking, patrolling the Arabian Sea, and also taking part in various assignments as part of its various missile defence solutions.