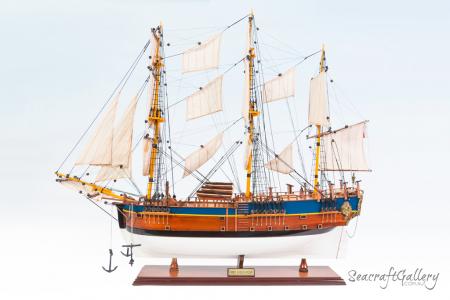 When it comes to importance, the HMB Endeavour (or HMS Endeavour)  ship certainly sits high up on the list, given its role in world discovery. Under the command of Captain James Cook, this important naval ship played an essential role in the discovery of Australia. Across a nearly three-year expedition, this ship helped to chart an entirely new course for the world that we live in.

It would be more impressive to display your HMB Endeavour ship models in a hardwood & perspex display cabinet specially designed for tall ship replicas.

The HMB Endeavour began life in 1764 as the Earl of Pembroke, a collier, before being purchased by the navy in 1768. In those days it was to be used as part of a scientific voyage. It set sail from Plymouth in 1768 under the command of the legendary Captain James Cook.

This ship played a major role in how we understand the layout of the world, thanks to the work of James Cook, who was considered as one of the greatest ships and explorers of the era.

Sailing around Cape Horn, the ship moved into uncharted territory before stopping off at the Pacific Islands, including Huahine and Borabora, to be claimed by Britain. Eventually, she anchored off New Zealand in September 1769, becoming the first vessel from Europe to arrive here since Abel Tasman almost 130 years prior.

The journey, though, was not without issue: Cook reached Australia’ east coast in 1770 and came ashore at Botany Bay. However, a near-miss with the Great Barrier Reef meant that Cook had to improvise, getting rid of much of the ships cannons to make it light enough to move.

In that year, it was circumnavigated, with the whole area chartered from north and south. However, it was not until sailing west that he discovered the incredible coast of Australia. The search, you might imagine, continued for some time. He even found other major landmarks when sailing, including Jakarta, Indonesia, when searching for help with repairs to the ship.

It was at this point that we started to find out just how big the world was – especially compared to Great Britain. Eventually, she returned to Dover via the Cape of Good Hope on the 12th July 16771, having been at sea for the best part of three years.

Indeed, Cook is the first person to have charted a large part of the Australian coastline, and to put the continent in a fixed location. Thanks to the work done by his incredible vessel, he was able to help us chart a better idea of the world in which we inhabit. On top of that, the Endeavour played a major role in helping to overcome the scurvy problem – a common problem due to long voyages and poor diets.

Not only did the HMB Endeavour change our geographical knowledge, but it also played a great role in adjusting nutrition for the men and women of the sea.

It served as a troop transport during the American War of Independence, before being scuttled in 1778 near Rhode Island. In 2018, the wreck was believed to have been discovered by a group of marine archaeologists. To this day, though, the best replica of the HMB Endeavour can be found in the Australian National Maritime Museum, Sydney.