View cart “Vasa (Wasa) 85cm” has been added to your cart. 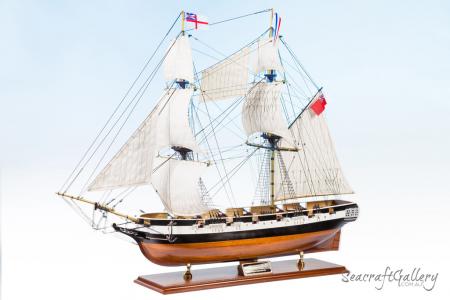 With a rich backstory and a story which his perfect for detailing the pressures of life at sea, the HMS Bold could have a movie made about it. If you are looking for a ship model that feels entirely different to the rest, then, this may be the one for you. Meticulously handcrafted and painted, this 85cmHMS Bold ship model in 1:60 is a fantastic choice of your nautical décor theme.

It would be more impressive to display your HMS Bold model in a hardwood & perspex display cabinet specially designed for tall ship replicas.

About the HMS Bold

On 18 October 1804, Bold was in company with the hired armed brig Ann & cutter Florence and the brig-sloop Cruizer when Cruizer captured the 17-gun privateer Contre-Amiral Magon in the North Sea. Actually, Cruizer left Bold, Ann and Florence behind during the pursuit and they played no part in the capture.

On 29 May 1810 boats from Bold, Desiree, Quebec, and Britomart , all under the command of Lieutenant Samuel Radford, attacked several French armed vessels in the Vlie. They drove ashore and burned a French lugger of six guns and 26 men, and captured and brought out another lugger of 12 guns and 42 men, a French privateer schuyt of four guns, a Dutch gunboat and a small row boat. The British had no casualties; the French lost one man killed and three wounded.