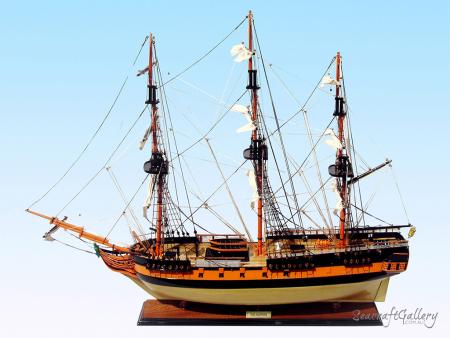 As one of the most popular ships in French history, the HMS Surprise achieved a great many things in its history. This deeply important part of French naval culture is a popular choice for many of our buyers. They see this as the ideal ship to have in their public gallery, their boardroom, their personal office, or anywhere else they wish to have it.

Included in a rich and stylish display case, this is the ideal choice for adding another touch of glamour to your decorations. The HMS Surprise, otherwise known as the Unite, was a major part of French and then British naval history. If you would like to include some unique décor that harks back to a very interesting period in French-British relations, be sure to take a look at our unique recreation of the HMS Surprise!

Constructed by Pierre-Alexandre Forfait, the HMS Surprise was formerly known as the Unite. It was a corvette-class ship that was a major part of the French navy. It served as part of their warships and their frigates, changing classification from time to time. It was first taken command of by Jean le Drezenec, a 41-year-old who had entered naval service post-revolution. He and his team fitted the ship out and made some changes to help make the ship easier to use. The longer guns that were hard to reload and the lower sails, which were too large, were noted as issues.

It took part in various battles, including the Glorious First of June and then took part in escorting the now-dismasted Revolutionnaire. In 1794, the Unite was damaged heavily in battle and had to go to Brest to be repaired. She spent some time escorting vessels after this, including taking part in various interception missions near Ireland and the Hebrides. It captured the Dianne, a 200-ton merchant ship. However, poor weather meant the ships became separated from one another, and the Unite had to eventually return back to its stop in Brest.

It was repaired and sent to meet the Mediterranean fleet out at Toulon. It spent time here as a courier ship or as part of a blockade problem. However, it was sent to take part in a North African courier mission, and Le Drezenec, who was suffering from smallpox, left the mission in the hands of his Lieutenant, Le Breton.

Thomas Freemantle, in charge of the HMS Inconstant, came to intercept the Unite and defeated it with ease. It was captured and taken intact, and then renamed the HMS Surprise as another French ship called the Unite had already been captured. It was turned into a six-rate frigate and became an unusually large-armed frigate. It sailed as part of the Caribbean expeditions for some time, capturing various privateers over the years. It gained fame for the cutting-out expedition that took place in 1799 of the HMS Hermione.

The Hermione had suffered from a crew mutiny, and it had been sailed to the Spanish. Captain Edward Hamilton of the Surprise led a boarding party, and soon the shape was taken back amid major gunfire. Surprisingly, none of Hamilton’s crew were killed, though four were harmed.

In 1802, the ship was sold out of service after the Treaty of Amiens. Shortly after, it was broken up and dismissed to history. Today, though it might no longer exist, the HMS Hermione was a genuine game-changer in it’s day. A hard to class frigate is a rare thing indeed!