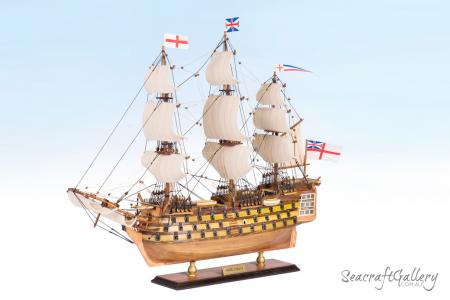 The HMS Victory is one of our most popular model ships thanks to its rich, articulate history. It came to be commissioned on the 7th May, 1765, and was first launched from Chatham Dockyard. The ship, from that date, became a crucial fixture of British naval warfare for the next two centuries. The person given command of the ship for the first time, in March 1778, was that of the famous Captain John Lindsay. That tenure, though, lasted but two months; in May 1778, Lindsay was transferred when Augustus Keppel decided to raise his flag aboard the Victory instead. In 1778, she was fully commissioned under Rear Admiral John Campbell, and Captain Jonathan Faulkner, as its respective two Captains. Flying under the flag of the famous Admiral Keppel, the ship became a well-respected veteran of the seas, among the most feared warships on the water.

In October 1805, though, the ship truly gained legendary status, when it took part in the Battle of Trafalgar. The Spanish fleets were running rampant, but it was under the leadership and authority of the HMS Victory that the tide was turned and the battle secured in the name of Britain. Capable of launching half a ton of iron through the sky at distances over half a mile away, the incredible ferocity of the ship was sure to be felt. In 1812, the ship was retired from active war duty, and instead spent the next century plus serving various ceremonial and practical roles for the British state. With over 300,000 visitors every single year, this stunning shape maintains its role as one of the most beloved museum ships on the planet.