View cart “Dragon Yacht 60cm (Last one)” has been added to your cart. 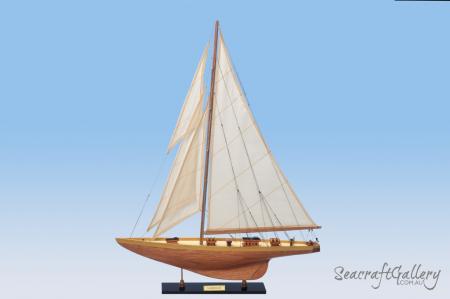 Coming up to 90 years since the Shamrock V was first built, this boat was a major part of the work of Sir Thomas Lipton. She was the first British yacht to take part in the new J-class rulings and is the only J-class yacht to have been built with wood. Despite having gone through numerous changes and improvements compared to previous models, she was still no match in the America’s Cup against the likes of the Enterprise. Still, to this day, she’s become a bit of a legend in British nautical history. This Shamrock model sailing boats can be an ideal finishing touch to any nautical themed rooms at home or in the office.

However, in race three, there was an actual race. While the Shamrock eventually blew its lead, via tackling duel. At this point, the main halyard of the ship became damaged and collapsed – giving her no chance in the fourth and decisive race, with Lipton proclaiming “I can’t win” in response. However, the Shamrock – and Lipton, to an extent – came up against the better boat and expert. Harold Vanderbilt was a legend of the racing circuit, and simply won due to his ability. Sadly, Sir Thomas Lipton died a year later, never fulfilling his dream.

Be the first to review “Shamrock Yacht 60cm” Cancel reply