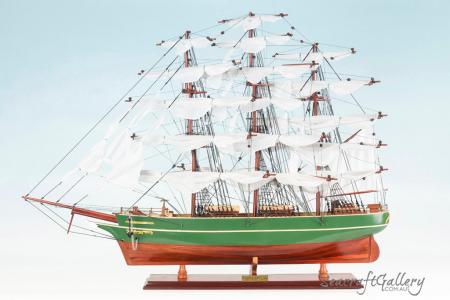 The three-masted sailing Thermopylae ship holds a significant place in the maritime history of Australia. She was one of the fastest and most renowned clippers engaged in the wool trade between England and Australia in the late 19th century. On Thermopylae’s maiden voyage, she sailed to Melbourne in just 60 days breaking the record of this journey. It still remains the fastest trip under sail and only steamers had previously matched such speeds. Seacraft Gallery proudly introduce this three-masted sailing ship model with fully rigged, beautiful sails and amazing details. Together with Cutty Sark, Thermopylae wooden ship models would recall of historic racing of two rival clippers that thrilled the world and brought fame to their masters on epoch-making voyages across the oceans.

Thermopylae was built by Walter Hood for the Aberdeen White Star Line and was launched on 19 August 1868. She was designed by Bernard Weymouth for the China tea trade to carry expensive perishable cargo quickly around the world.  On her maiden voyage from London to Melbourne, captained by Robert Kimball, she made a speed record with 60 days, still the fastest trip under sail. On her continued voyages, she performed impressively from Newcastle, NSW to Shanghai in 31 days, and from Shanghai to London in 91 days.

The Cutty Sark was built the following year to compete with Thermopylae in bringing back the new season’s tea from China. In 1872 Thermopylae loaded a cargo tea alongside with Cutty Sark in Shanghai, then on 26 June, two vessels set off in the race to be the first ship back to London. After racing each other for two weeks the Cutty Sark lost her rudder after having passed the Sunda Straits.

Thermopylae finally arrived in London only seven days ahead of her rival. Her record day’s run was 380 statute miles, a feat exceeded by no sailing ship before. From 1882 she took part in the Australian wool trade.