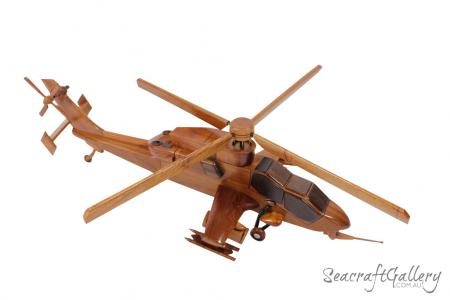 Description Seacraft Gallery presents to you the authentic replica of Tiger helicopter with historically correct details. This model is hand carved from solid mahogany by skilled craftsmen and not constructed from kits. After passing through several stages of sanding and priming, multiple coast of clear lacquer are then applied into Tiger helicopter model to reflect the true beauty of natural wood and for an overall glossy finish. This model will be a special gift for your loved ones or a timeless display on your office desk. This model is required a quick and easy assembly within 3 minutes as an enjoyable thing. To ensure a damage-free product straight to your doorstep, pieces of the model as shown in the photo are safely covered with foam and separately packed in a box. Dimensions:  42cm Rotor, 48cm Length, 13cm Width, 17cm Height with stand. Features: Realistic wings rotate and wheels turn

History In July 2009, three French Tiger HAP helicopters of the 5th Helicopter Regiment arrived at Kabul International Airport in Afghanistan, marking the first active deployment of the Tiger into an active combat zone. The helicopters performed armed reconnaissance and fire support missions, acting in support of coalition ground troops fighting a Taliban insurgency. The Tigers had their operational certification in Afghanistan in early August 2009. By July 2010, it was reported that the Tiger detachment had totalled 1,000 operational hours in Afghanistan. On 4 February 2011, a French Tiger crashed during a nighttime operation about 30 miles east of Kabul, both crew members suffered light injuries. During the 2011 military intervention in Libya, France deployed the French ship Tonnerre amphibious assault helicopter carrier, carrying a number of Tiger attack helicopters aboard, to the Libyan coast conduct military operations upon military targets within Libya. On 4 June 2011, French Tigers, alongside British Army Apache helicopters, commenced active combat operations within Libya. During December 2012, a total of four German UHT Tigers were deployed to Afghanistan. The UHTs are operating from Mazar-i-Sharif air base, Afghanistan; all Tiger helicopters deployed to the zone underwent an upgrade and reconfiguration programme to suit the theatre, these changes included the addition of new defensive systems and sand filters, as well as alterations to the on-board communications suite.
Add to Wishlist
Add to Wishlist