View cart “HMS Bounty 50cm” has been added to your cart. 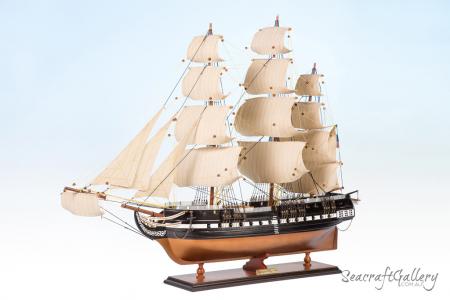 As a major part of the history of sea warfare, the USS Constitution is a ship of incredible repute. It served in a range of crucial battles, yet today is still afloat across the seas. In fact, today it’s the oldest commissioned naval vessel which is still afloat. A stunning piece of construction given the era it was built in, the USS Constitution was a game-changer. Known as Old Ironsides with some affection, the USS Constitution today is one of the most famous ships of its era. Now, you could own a quality scale model of the ship itself. Having served in so many crucial battles in its history, the USS Constitution is a vital part of the history of naval warfare. This would make the perfect finishing touch for an office, a study, or anywhere you would be able to appreciate the majesty of such a vital piece of naval warfare.

Built in Boston, it was designed to give protection to American merchant ships during the conflict with France. It also played a crucial role in helping to contain Barbary pirates during the First Barbary War. Arguably the crowning moment of the USS Constitution, though, came during the War of 1812. It served a crucial role in turning the tide of war against the United Kingdom. It helped to capture numerous famous merchant ships and also overcame major British wartime ships such as the HMS Java and HMS Levant. It won a famous fight, too, against the HMS Guerriere. This fight earned the ship its nickname of Old Ironsides, and it soon became a major part of national culture.

Though it was threatened with scrapping not long after, public adoration put an end to that plan. The ship was instead used as a major part of American wars in Africa and the Mediterranean, playing a major role. It also circled the world in the 1840s. The ship, though, played a role in training new navy staff on the build-up to the American Civil War. Afterward, it was used for things like carrying artwork to the Paris Exposition in 1878.

In 1881, it was retired from active duty and served the rest of its life as a receiving ship and then a museum ship from 1907. It completed a tour of the nation in 1934, and sailed again in 1997 as part of its 200-year celebrations. In 2012, it completed a sailing trip to help complete a historical trip memorising the war against the Guerriere. Today, it’s used to help promote a wider understanding of what the US Navy can do for both war and for peace. It’s used in both educational events, historical demonstrations, and active participation in various public events. While it might no longer be able to participate in actual warfare due to the changing in military conditions compared to its own era, it still plays a vital role in helping the next generation understand naval warfare.