View cart “HMS Sirius 75cm – Flagship of the First Fleet” has been added to your cart. 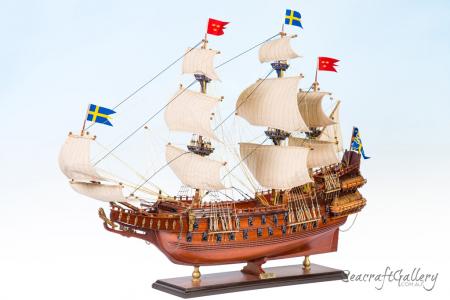 As the ship billed as the heaviest and most splendid of the Swedish navy, Vasa or Wasa was intended to be a statement of imperial pride and expansionist ambition for Sweden, and the glory of Swedish King Gustavus Adolphus. She is the grandest warship in the fleet of Swedish King Adolphus and was built according to his personal specifications. An image of gluttony and strength, it was supposed to take part in the Thirty Years’ War and was to be used to help display Swedish naval prowess. This Wasa model ship is a recreation of one of the most beautiful ships built in the early 1600s. Now this replica with finest craftsmanship of the famous Swedish tall ship may similarly occupy a proud position in your office, home or meeting room. You can also pick up display cabinets, making it easy to showcase this ship on grand display.

The model is also available at smaller size 45cm.

It lay dormant until the 1950s, when a largely intact hull was finally pulled out from the sea. This took place eventually in 1961, and was housed in a museum custom-built for it alone Eventually, it was moved to Stockholm, where it joined the Vasa Museum stock. Today it attracts tens of millions of visitors. The fact it was so strong and powerful was part of the problem; all it took was a mild breeze to blow the whole thing horribly off course. Even in port, though, its instability was easily noticed. The King of the era, though, lacked the patience to wait for this to be solved – the maiden voyage was supposed to join up with the ships taking part in the Thirty Years’ War. The fact that nobody was found to be at fault for the failed ship probably tells its own story. Even after so long underwater, many of the items onboard were found intact and helped really paint the picture of 17th-century naval warfare. At the very least, it let us see that, if nothing else, the Vasa was indeed as opulent as it was proclaimed!

Be the first to review “Vasa (Wasa) 85cm” Cancel reply