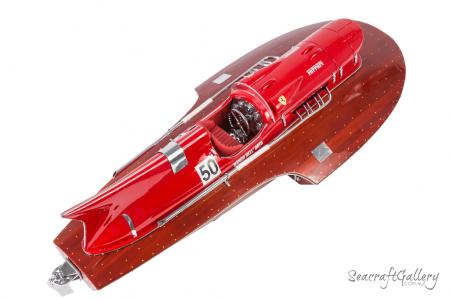 As one of the most famous speedboats of all-time, the Ferrari Arno XI is a boat that broke records that were never surpassed. Capable of hitting a whopping 150.19mph on the Lake Iseo waters, it’s a record holder for an 800kg boat. Having undergone numerous changes to create the mother of all hydroplanes, this was the brainchild of Achille Castoldi. After many changes and improvements, this set a still-unbeaten world record. For that reason, it’s a boat that holds incredible interest for boat fans and speed enthusiasts.

This 70cm speedboat model helps to complete any model boats collection. It’s an ideal wooden model boat, created with precision and attention to detail to everything. From the structure of the boat to the markings across the hull, this is a lovingly crafted speedboat model that lives up to the legend of the Arno XI itself. A perfect choice of boat for lovers of fast-paced, energetic boats that have made history both now and in the past.

About the Ferrari Arno XI Hydroplane

In 1953, there was a competitive edge about nautical travel. Many people wished to set new world records for the speed of travel on water. One man who was determined to do so was that of Achille Castoldi. To do so, he set about commissioning the creation of what would become the Ferrari Hydroplan. He built an 800kg hydroplane hull for his dream boat but needed an engine of imperious power to make his dream possible.

To do that, he turned to newcomers Scuderia Ferrari. He turned to boat building experts at the Cantiere Timossi boatyard, Azzano. It took some time to convince Enzo Ferrari to take part, though: at first, the legendary manufacturer was not convinced. Thanks to help from friends – including Luigi Villoresi – Castoldi got his wish. To do so, they created the 385HP, 4494cc 375 V-12 Grand Prix engine. This was their most powerful engine for a hydroplane, with 10,000RPM capable – unheard of at the time. He dubbed his new boat the Arno XI, and could not wait to try it out. Come 1953’s Campione d’Italia races, then, Castoldi set foot in his new boat. Before the official two-way run, Castoldi impressed by hitting a whopping 124mph during shakedown testing. Long-term rival, Mario Verga, left him in his wake. He created a speed record of 125.68mph, followed by a 140.74mph speed record set two weeks later. Castoldi, then, needed even more! So, he turned to the Ferrari team once again – and this time had a 600HP 4.5L supercharged engine built instead. This methanol burning engine was a demon – even by todays standards, it would be impressive.