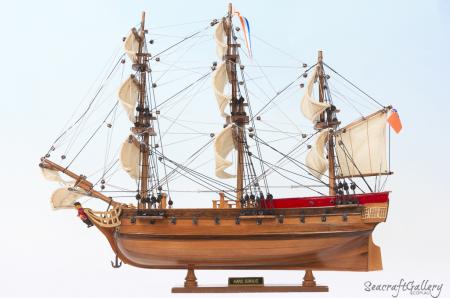 History is littered with many important moments, especially in the development and colonization of other countries. One such example of this is the HMS Sirius, the flagships of the First Fleet ships. It set out from England in 1787, via Portsmouth, to help set up a European colony in New South Wales, Australia. The HMS Sirius played a major role in the discovery and establishment of Australia. With HMS Supply, the HMS Sirius was among the most important ships of this journey. Now many of its post-wreckage artifacts can be found in the Australian National Maritime Museum in Sydney.

The HMS Sirius has become a popular choice of model ships for display thanks to its legacy.

About the HMS Sirius

Many ships are built with a specific purpose. The HMS Sirius, though, was built with one of the most important objectives of its era: discovery. It did not start out life as the Sirius, though: indeed, it was once known as the HMS Berwick, keeping that name from 1781-1786. In the same year, though, it was relaunched with the main aim of working as part of the Royal Navy. Eventually, though, an even greater purpose was found for the HMS Sirius.

With around 160 men on-board, the ship was under the command of Arthur Philip and John Hunter. Once the colony was set up, Hunter was to take official charge. Eventually, after stops at the likes of Santa Cruz ad Rio de Janeiro, reached New South Wales in May 1787.

The first port was set up at Sydney Cove, within Port Jackson, in 1788. This became known as ‘Australia Day’ and became a key settlement for the region. The HMS Sirius, though, was used for numerous food and supply runs, and managed to sail around the whole world – including a trip to Norfolk Island in 1790 to drop off some soldiers and supplies.

However, poor weather meant getting the supplies onshore was going to be impossible. Sadly, Captain Hunter pushed the boat too far when trying to land the supplies on Sydney Bay. The ship was damaged, wrecked on a reef on March 19th, but nobody was lost in the wreckage. What was lost, though, was a legend of the industry: the HMS Sirius. Today, though, it’s still remembered as one of the major ships used in the settlement of Australia for Europeans.