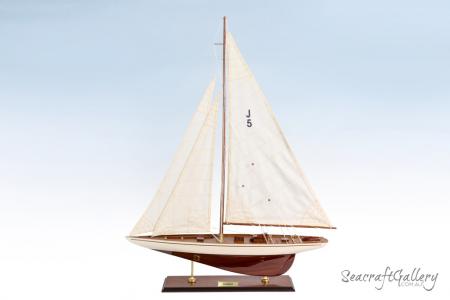 The J class yachts are some of the beloved of the America’s Cup Wooden Sailboats because they represent an excellent compromise between seaworthiness and speed. The original 40-metre Rainbow yacht won the 1934 America’s Cup and the replica of one of the most beautiful racing yachts was recreated at Holland Jachtbouw, Netherlands in 2012. Our wooden Rainbow model looks to bring its fascinating history to life in miniature level. This handmade model, adorned with finely-crafted features and graceful lines, is an ideal gift for sailboat lovers or makes a stunning decoration for your room or office.

About the 1934 Rainbow racing yacht

Rainbow is a classic J yacht was designed by William Starling Burgess and launched after a mere 100 days of construction at the Herreshoff yard in USA on 15 May 1934. Her owner, Harold Vanderbilt, was pleased  Burgess’s design, had been brought to fruition in time for Rainbow to defend the America’s Cup in 1934. And even more delighted when his yacht saw off Sir Thomas Sopwith’s Endeavour by four races to two. The replica of Rainbow yacht was recreated  by Dutch yard Holland Jachtbouw in 2012, based on the original design with a morden update form Dykstra Naval Architects.