View cart “RMS Queen Mary II 80cm with Lights” has been added to your cart. 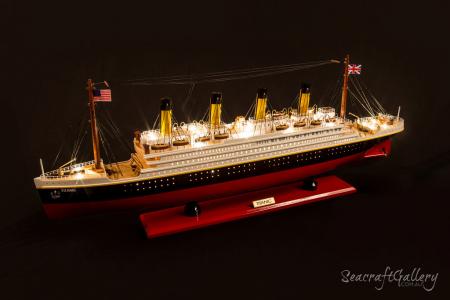 For various reasons, the RMS Titanic ship is one of the most iconic cruise ships of all-time. Seen as the pinnacle of cruise ships at the time, to this day it would be hard to find a ship to rival the Titanic. So famous that it has spawned countless movies, books, documentaries and podcasts, the Titanic is a curious if macabre case of what can go wrong – even with seemingly impregnable ships. This cruise model ship, then, makes the perfect choice for those who find its history fascinating. This 80cm recreation of the RMS Titanic, complete with lights, makes a fine addition to any location. It’s a Titanic model that includes every detail, major or minor, to a museum-quality standard. The design is enriched with added detail, but also accuracy and attention to history. As arguably the most famous ocean liner in human history, we’ve made sure that this 80cm Titanic model cruise (with LED lights) lives up to the legend.

The RMS Titanic model cruise with LED lights is also available in 60cm.