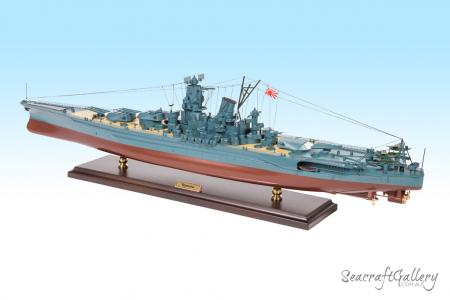 When it comes to the Second World War, a major part of what made the war so challenging was its all-purpose nature. Battles took place in the air, on the land, and on the waves of the water. The development of impressive war technology at the time led to the development of many top-class vessels at the time. Few options, though, are more exciting to look back at than the Yamato.

The Yamato is one of our most popular replica vessels from this era; a stunning piece of work that lasted from 1937 until 1945 when it was finally sunk. As a key part of the Japanese armada during the Second World War, this is a ship that holds pride of place for many. A feat of engineering for its time, the Yamato makes an excellent decorative addition to any boardroom, boat collection, or decorative arrangement.

The ship itself was first laid down in November 1937, and was to be developed as part of the Yamato-class battleships. It was built by the Kure Naval Arsenal, and development lasted until August 1940 when the ship was finally launched. Commissioning did not take place until the end of December 1941, but the Yamato would then serve as a major part of the Japanese naval fleet until 1945.

Regarded for its impressive power and a crew that reached around 2,750, the Yamato was major feat of engineering at the time. alongside the Musashi, these were the largest battleships ever built in terms of size. It was developed under the belief that the Japanese needed to control the Pacific, and needed terrifying warships to do so.

Developed with an incredible armada and a length of 863ft, the Yamato would be daunting even by todays standards. It was also equipped with seven aircraft, so it could participate in extra bombing runs and raids where needed.

Interestingly, the ship had little actual wartime experienced – it was commissioned after Pearl Harbor, and it did not actually take part in many battles. The Yamato, though, did take part in battles like the Battle of the Philippine Sea, even if it did not fire a shot in anger. The only time the ship actually used its immense firepower was in October 1944, when it was used to help engage in the Battle of the Leyte Gulf. In this battle, it was quickly pulled out after Japanese reconnaissance alerted the Japanese forces to the strength of the fleet they had attacked, at the Battle off Samar.

However, as the balance of power began to shift in the Pacific conflict, by 1945 the Japanese were in full retreat and its fleet was severely damaged. Fuel shortages were causing serious issues, and the Yamato was brought out to try and stem the tide. On a one-way mission to Okinawa, though, the ship was beached and fought until it was eventually destroyed.

American bombers and torpedoes eventually sunk the Yamato as it made its last stand to try and protect the valuable island of Okinawa. For many, while the ship actually took part in little combat action, the Yamato was an example of the Japanese approach to controlling the Pacific in the 1940s. The Yamato, though, is also another example of a massive warship that, when push came to shove, could not replicate the capabilities that it was supposed to provide.