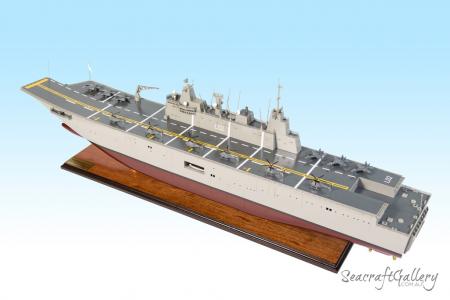 Australian naval history is full of famous names, names which are often associated with famous places and people within Australian culture. However, when it comes to ships, a hugely popular name is the HMAS Canberra. Indeed, this is a name that has been used three times. The HMAS Canberra is a lead ship of the two Canberra Class amphibious assault ships, sometimes known as Landing Helicopter Dock (LHD) craft ships. It is a ship that has a lot of insight taken from Spanish ships, with ideas taken from Navantia, a popular ship building firm in Spain.

If you would like to build a replica ship collection, why not take a look at our popular HMAS Canberra III ship replica to buy?  This hand-crated model is designed to give you the ideal display point in any office, boardroom, or personal study. It’s the ideal gift for anyone from ex-Navy personnel to those with a love of all things nautical.

The largest ever ships built by the Royal Australian Navy, the Canberra Class ships hit a whopping 27,000 tonnes. These ships are hugely popular and will provide the Australian Navy with best-in-class air-land-sea amphibious deployment systems that match anything else in the world. They will play a key role in defending Australia and its wider interests, and also offer the capability for elite humanitarian assistance across the region.

The HMAS Canberra III was first laid down in September 2009, finally launching in February 2011 after being launched by Mrs Vicki Coates. The ship comes with a whopping four main decks, suitable for its various vehicular support and flight deck support functions that it provides. The Canberra III is the third ship in history to bear this name after the Kent Class and Adelaide Class cruiser and frigate, respectively.

It began sea trials in February 2014, and quickly became a key part of the Fleet Base East port collection of ships. It is capable of taking land forces as large as 1,000-strong as well as carrying weapons, ammo, and vehicles for any mission that might be needed. It also is capable of taking part in and leading amphibious operations, making the HMAS Canberra III one of the most versatile ships in the RAN.

However, the HMAS Canberra III is also aimed at being used for non-warfare purposes when possible. It is fitted with capability for large-scale humanitarian aid projects as well as various disaster relief focuses. The medical facility is capable of matching that of a regional hospital, with critical care units and various dependency level beds provided. On top of this, the HMAS Canberra is also fitted with radiology, x-ray, pharmacy, and dental services ensuring that it can help out where and when needed.

Noted for its importance to the Navy, the HMAS Canberra carries the L02 pennant number despite being the first of its class to be built. This is because the HMS Adelaide (III) carries the L01 pennant. This allows the two ships to remain different from each other, ensuring that pennant numbers line-up with convention.

As the flagship of the Royal Australian Navy, then, the HMAS Canberra III is a crucial part of what makes Australia one of the lead names within defence and support within the wider region.