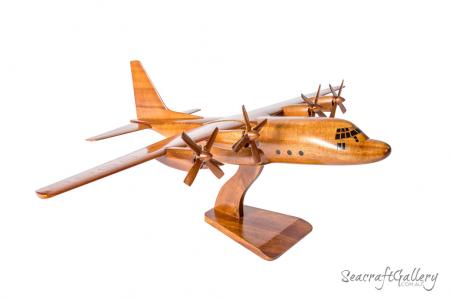 Seacraft Gallery presents to you the authentic replica of C130 Hercules aircraft with historically correct details. This model is hand carved from solid mahogany by skilled craftsmen and not constructed from kits. After passing through several stages of sanding and priming, multiple coast of clear lacquer are then applied into C130 Hercules aircraft replica to reflect the true beauty of natural wood and for an overall glossy finish.

This model will be a special gift for your loved ones or a timeless display on your office desk. This model is required a quick and easy assembly within two minutes as an enjoyable thing. To ensure a damage-free product straight to your doorstep, pieces of the model as shown in the photo are safely covered with foam and separately packed in a box.

The versatile airframe has found uses in a variety of other roles, including as a gunship (AC-130), for airborne assault, search and rescue, scientific research support, weather reconnaissance, aerial refueling, maritime patrol, and aerial firefighting. It is now the main tactical airlifter for many military forces worldwide. Over 40 models and variants of the Hercules serve with more than 60 nations.