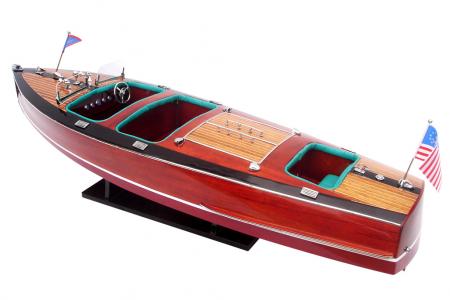 When looking at handcrafted wooden boat models to create the right atmosphere in your office, the Chris Craft Triple Cockpit 1930 might just catch your eye. This boat is a fine example of the most famous classic American Runabouts.

Our 80cm Chris Craft Triple Cockpit wooden classic model boat – special with white interior is a fine example of what this kind of boat should represent. Every effort has gone into capturing the luxury of the Chris Craft itself, ensuring this boat model can carry on the legacy of the famous American Runabouts. Perfect for board rooms and for model boat enthusiasts, this is a must-have for those who love classic, powerful speedboats!

About the Chris Craft Triple Cockpit 1930

In 1874, a 13-year-old Michigan boy built himself a skiff. The folks in Algonac liked it and asked the enterprising youngster to build more. And he did. Chris Smith went on to become one of the premier boatbuilders in America. His company, Chris-Craft, became synonymous with pleasure boating.

By the 1920s, Chris-Craft was building a variety of models at a range of price points so there was a “boat within the reach of everyone.” The public responded. It was the Roaring ’20s, with easy money, fast cars and leisure time for boating. At the end of the decade, Chris-Craft had become the largest-volume producer of standardized powerboats in the world. Among the most distinctive boats were the triple-cockpit runabouts — 11 models starting at 20 feet. (The boat shown here is a 25-footer from 1937.) Elegant dayboats, they were built of double-planked mahogany (with oiled canvas in between) on white oak frames. A single engine powered them at speeds that ranged from 28 to 45 mph, and they were deemed “safe for the amateur to operate.”

The sales pitch worked because the boats were a lot like automobiles. The driver sat up front behind an adjustable windshield, and the helm had an automobile-style steering wheel, throttle controls, a dashboard with gauges and a floor-mounted gearshift lever. The bench seating (with kapok filling) was separated into three cockpits, similar to the seats in a big touring car. The gas engine (Ford, Chrysler or Hercules) was mounted between the middle and aft cockpits.

The triple-cockpit runabout was a boat to ride around in — to see and be seen. High-profile customers, from movie stars to moguls, sought out the various models. The biggest yachts of the day might have had a Chris-Craft as a tender. And they were popular as water taxis and harbor tour boats.

The stock market crash of 1929 put a crimp in Chris-Craft’s production, and less-costly Utility models, with open layouts and a single seat, replaced the sleek runabouts. Today, triple-cockpit runabouts are prized for their classic looks and on-water performance.