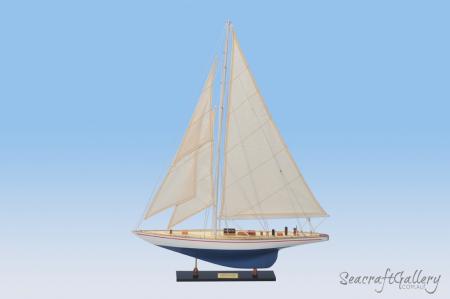 As J Class yachts, designed per Nathanael Herreshoff’s Universal Rule, each of the yachts were required to make the same rating based on calculating a number of each ship’s measurements. With this rule, any ships with similar ratings could race without having to make adjustments for various sail sizes and boat lengths. As the new designer at Herreshoff’s Manufacturing Company, in Rhode Island, W. Starling Burgess set about collecting 20 years worth of data on the previous races, analyzed the wind to predict conditions on race day, and incorporated many design elements that, for the time, were quite revolutionary. Previously a designer of the M Class yachts, as well as a plane designer during the war, Burgess felt he could create the racing yacht of the future for the New York Yacht Club.

Laying down the hull, Burgess utilized steel frames and bronze planking, opting for a balance of strength and light weight instead of heavier wood. At 120 feet long and 22 feet wide, the Enterprise emerged at just under 130 tons with vast improvements that would give her a racing edge. While the deck was made of pine, and the boom also of wood, the 165 foot single mast was crafted from lightweight hardened aluminum; the first of her kind. With a Bermuda rigged triangular sail, instead of the more standard four-cornered Gaff Rig, she more efficiently used the wind, and with 23 winches the crew would appreciate greater control. Also included, for the first time, were modern electrical navigational instruments that would allow the crew to sail on as accurate a course as possible. Launched on April 14, 1930, the Enterprise would soon be gliding over the seas in the race of a lifetime.