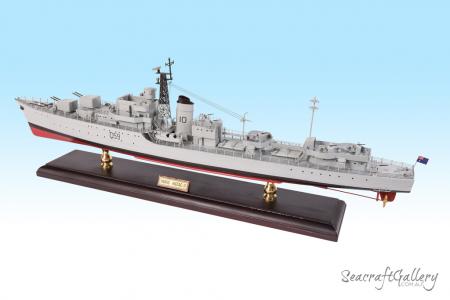 Australia has a long and proud history of developing high-class, modern-day warships. However, this history stems back many years to before the Second World War. After the war had come to an end, though, several new ships were developed. The world had entered a new age of naval technology, and the post-war developments were key to keeping the Australian navy at its peak in terms of firepower. One ship that was developed in this post-war era was the HMAS Anzac II.

As one of the most beloved ships of the era, the HMAS Anzac II has gone down in history ever since it was first laid down at Williamstown Dockyard on the 23rd of September 1946. The ship itself was launched on the 20th August 1948 by Lady Collins, the wife of Vice Admiral Sir John Collins, RAN. The ship was accepted as part of the Royal Australian Navy by March 1951, and became a crucial part of operations for years to come.

As mentioned above, the ship was first tested in the Australian waters prior to being handed over to the RAN. The ship left in July 1951 to take part in the Korean War, and played a crucial role in this battle. Part of its mission was to assist the USS Sicily as part of an aircraft carrier operation off the western coast of Korea. The HMS Glory took over from the Sicily, and the Anzac then carried on assisting with bombardment attacks in western Korea.

The first time the HMAS Anzac II was used in live combat was on the 6th of September 1951, when it arrived to back the Commonwealth Ensign when it was broken at the fore. It also assisted in combat in Wonsan, where she was given the task of Commander Task Element 95.22 alongside US vessels such as the Thompson and the Naifeh. She continued as part of this operation until the 26th of September, departing and arriving back at Sydney Harbour by the 20th of October.

The HMAS Anzac II underwent several refits in the late 1950s, and spent most of its time patrolling the Korean coast, re-joining the war effort in this part of the world. It operated as part of the war effort until the end of the second tour in Korea. She was awarded battle honours in the post-victory celebrations. The ship was often mistaken for a British vessel, though, due to similarities in the Ensign that both military groups used. The HMAS Anzac II, then, was the first to be given the classic kangaroo design included as part of its Ensign – this would eventually become the norm for all Australian military vessels.

After the war, it served as part of the Queen Elizabeth II’s coronation tour, carrying the Queen, the Duke of Edinburgh, and several other Royal Family members during their trips around the Commonwealth. In terms of operations, its post-Korean life was often involved in tours, gunnery exercises, and serving as part of the Far East Strategic Reserve.

It also served a part of the Malayan Emergency, receiving honours for the work done during here. As the ship edged towards its final years, it spent much of the 1960s and 1970s touring and taking part in celebratory events. The HMAS Anzac II was berthed at Garden Island in August 1974, and was decommissioned on the 4th of October of the same year. In total, it travelled roughly 1,184,506km in its career, and won multiple honours for the sterling work provided during its many years of service.