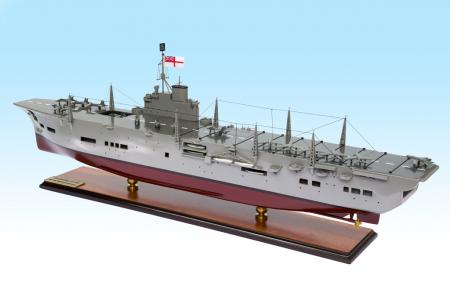 As naval products have changed and adapted over the years, aircraft carriers have become an essential part of modern warfare. The ability to keep aircraft off the shores of the area being attacked allows for much more consistent, proficient bombardment. However, aircraft carriers such as the HMS Unicorn tend to carry quite a different purpose. The HMS Unicorn was the first ever Royal Navy aircraft carrier to be designed with the sole purpose of acting as a Repair and Maintenance ship. For that reason, it holds a very strong reputation within the industry as a ship of historical repute.
If you would like to own a replica model of the HMS Unicorn, then we have a recreation of this famous aircraft carrier for you to pick up today.

Key Feature of the HMS Unicorn I72 Aircraft Repair Model:

History of the HMS Unicorn I72 Aircraft Repair Ship Model

Though not the first ship to be named the HMS Unicorn, this aircraft carrier was quick to claim the name for itself. It was fitted with a full-length flight deck to ensure that launch and landing of various carrier-borne aircraft could take place. However, it also operated as a respected fleet carrier of some size. The design of its hangers allowed for versatile storage of all kinds of aircraft and vehicles, including amphibians.

During the Second World War, the HMS Unicorn played a key role in acting as a key operational service fleet carrier. It also operated as a repair bay for any aircraft damaged in the field of battle. Maintenance workshops were commonplace, and they carried enough materials to fix and restore aircraft and other hardware.

With an overall length of 640ft, too, this was a massive ship – its beam alone was 90ft. It was also surprisingly fast, capable of hitting a speed of 22 knots. With four Anti-Aircraft mounts, too, the HMS Unicorn was more than capable of protecting itself during the wartime operations that it served such a key role of.

With space for around 35 aircraft to be fitted, this was able to carry aircraft of various shapes, sizes, and purposes to anywhere that they might be needed. The ship, though, was never really regarded with the respect that it deserved during the wartime effort. It was not until the late era of the war and its time spent in Korea as a ferry carrier that the ship began to be recognised as a vital part of the wartime era.

The ship was eventually slowly but surely brought out of service, and was nearly sold on as a troop carrier. Eventually, though, the HMS Unicorn was sold for scrap. It was active for over 20 years, then, with the ship first commissioned in Belfast in April 1939, and finally destroyed and sold for demolition in 1959.

While it might not have been given the respect it deserved at the time, this particular ship was a key part of major battles in areas as diverse as the Salerno to Okinawa and Korea. It served a vital support role during key battles, and goes down as one of the most important multi-function aircraft carriers of the era.