View cart “Yamato Japanese Battleship Model 100cm” has been added to your cart. 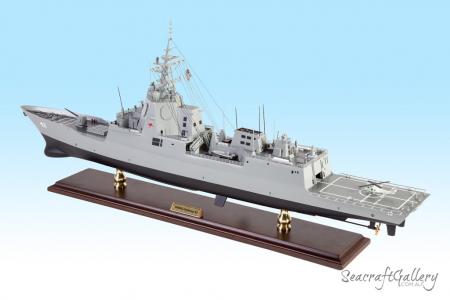 Australia has a long and proud history of developing high-class, modern-day warships. However, this history stems back many years before the Second World War. After the war had come to an end, though, several new ships were developed. The world had entered a new age of naval technology, and the post-war developments were key to keeping the Australian navy at its peak in terms of firepower. One ship that was developed in this post-war era was the HMAS Sydney (V) D42.

HMAS Sydney (V) is the last of the three ships of the Hobart Class guided missile destroyers. Her sister ships are HMAS Hobart (III) and HMAS Brisbane (III). HMAS Sydney is based on the Navantia-designed F100 frigate and is equipped with the Aegis Combat System.

We have designed this model to capture the real heart of the HMAS Sydney (V) with high attention to detail. The model was built based on the imagery, plans, and stories that make this vessel unique to ensure that our recreation feels as close to the real thing.  This model offers a must-have ship replica for collectors, historians, and military personnel alike.

Sydney was constructed in Australia by the Air Warfare Destroyer Alliance. Her principal role is the provision of air defence to RAN task groups engaged in maintaining maritime security. Sydney is also capable of supporting land forces and protecting important infrastructure in coastal areas.

The keel of Sydney (V) was symbolically laid down on 19 November 2015, on the anniversary of HMAS Sydney (II)‘s sinking in November 1941. She was launched on 19 May 2018 by Mrs Judy Shalders, the wife of former Chief of Navy, Vice Admiral Russ Shalders, RAN, in Osborne, South Australia.

Sydney was commissioned during a ceremony conducted off the coast of New South Wales on Monday, 18 May 2020.