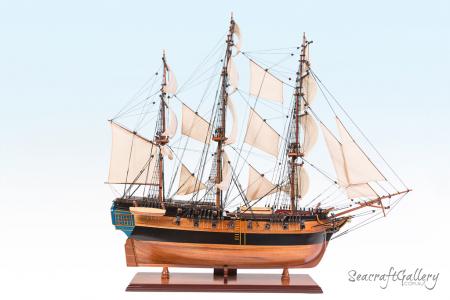 As one of the most important ships in the history of Australia, The HMS Investigator played a major role in the circumnavigation and exploration of Australia. This model ship of HMS Investigator leaves you with a pristine model of the famous ship, which was under the command of the legendary Lt. Matthew Flinders.

As the latest model to join our historical tall ship range, HMS Investigator model ships would make a fine choice of decoration to help finish off your collection. It is the ultimate memorial to one of the great explorers of any era, and would make an excellent choice in a display cabinet of your choosing.

The ship that was chosen was indeed the Investigator, at this stage known as the Xenophon. With ample space onboard for manpower and for supplies, the ship was the ideal choice – though certainly was also due some repairs. Avoiding the war against the French, the ship set off from Deptford dockyard after some adjustments and repairs. Now named the Investigator, it set sail to make history.

As of January 1801, the ship was put in charge of the young Matthew Flinders, aged just 26. And thus he set off to circumnavigate the whole of Australia, starting from December 1801 and lasting until June 1803. Sailing from Spithead to Australia, arriving eventually at the South West Australian coast, over at Cape Leeuwin.

Despite many struggles, including losing Ship Master John Thistle in a tragic capsizing accident, and the naming of Cape Catastrophe in remembrance of those who died, the trip continued and was eventually a major success. Despite running into the French from time to time – including a meeting with Captain Nicolas Baudin – the ship was able to achieve its aim and get back to shore without any issue.

The ship enjoyed many adventures over the years, before eventually being taken in by the Governor King of Sydney in 1804. The Investigator soon returned to England, arriving back into service before eventually being broken up in 1810, bringing an end to the glorious life of a ship that has played a major role in helping future generations understand Australian geography.

Indeed, the history of both The Investigator and Lt. Flinders is still growing to this day. Recently, his grave was discovered – having gone undiscovered for a long, long time. His grave was found to be under London station, and it soon became a major find. Now back in the news, the one positive is that we can finally lay the great Lieutenant to rest, and we can finally celebrate the life of one of the most famous ships of any era.