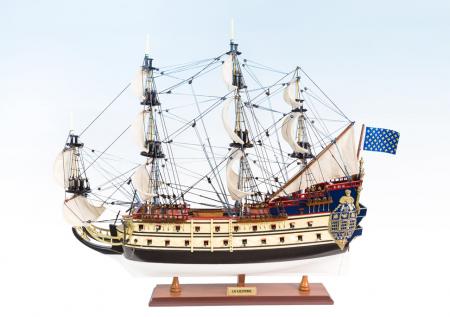 When it comes to famous ships, not every ship that we fall in love with across history is actually real. From works of fiction to tall tales, we have numerous stories to read about with regards to ships and boats. One ship that retains a huge sense of intrigue and mystery today is La Licorne, or The Unicorn. This 17th Century three-masted French Royal Navy ship is one of the most beloved ships in all of fiction. Why? Because it is part of the famous The Adventures of Tintin series, which is rated as one of the best comic series of all-time.

The ship is a key part of various storylines within Tintin. If you have read the likes of The Secret of the Unicorn and Red Rachkam’s Treasure, then you will no doubt know the ship. Are you a fan? Then you can buy a stunning replica of The Unicorn from our store today to keep with all of your other ship models!

About the La Licorne – The Unicorn ship

The ship might not be real, but it has a rich and glorious history within the fictional canon of Tintin itself. The storylines that revolve around the ship are wartime classics, published in the early 1940s during the Second World War. However, the Unicorn has also appeared in the 2011 film adaptation of TSOTU.

The Unicorn is typically a battle scene among pirates and sailors. It’s also the famous spot where the duel between Sir Francis Haddocks and Red Rackham first took place. The ship is scuttled and eventually sinks to the ocean, and it is up to Tintin and his friends to locate the pirates treasure that sunk with the ship.

The ship itself retains a long history within the universe, as well. The ship was a key part of the 1670s, and sailed under the Union Jack in the name of Charles II of England. Sir Francis Haddock is the commander of the ship, and an ancestor to Captain Haddock himself. However, the original French version of the story has the ship as a French vessel, flying as part of King Louis XIV’s naval army.

Interestingly, in real life the English Royal Navy had a ship, the HMS Unicorn that was commanded by none other than a Captain Haddock!

The story in the comics revolves around Tintin and co. trying to uncover the lost treasure of the famous pirate Red Rackham. Tintin believes it is aboard the ship, and thus heads along with his friends to find the models of the ship which were built – within one remains the treasure map of the location. The story unfolds as Tintin and his friends overcome various obstacles to eventually find the ship – we won’t spoil what happens next, though!

While the shop is by no means a ‘real’ object, anyone who grew up reading the works of Tintin will be all too aware of its existence. If you would like to get your hands on your own take on the famous ship, then now is the time – pick up a replica model today from our store of this most famous of fictional ships!