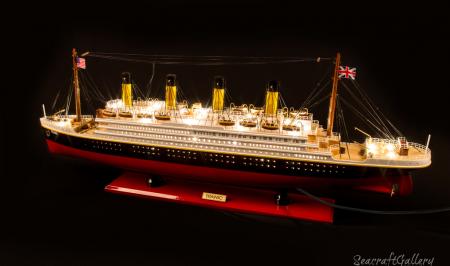 For various reasons, the RMS Titanic ship is one of the most iconic cruise ships of all-time. Seen as the pinnacle of cruise ships at the time, to this day it would be hard to find a ship to rival the Titanic. So famous that it has spawned countless movies, books, documentaries and podcasts, the Titanic is a curious if macabre case of what can go wrong – even with seemingly impregnable ships. This cruise model ship, then, makes the perfect choice for those who find its history fascinating.

This 80cm recreation of the RMS Titanic, complete with lights, makes a fine addition to any location. It’s a Titanic model that includes every detail, major or minor, to a museum-quality standard. The design is enriched with added detail, but also accuracy and attention to history. As arguably the most famous ocean liner in human history, we’ve made sure that this 80cm Titanic model cruise (with LED lights) lives up to the legend.

The RMS Titanic is easily one of the most famous and notable ships in modern history. It was capable of hold over 2,200 passengers and was seen as the perfect example of modern ingenuity. The largest ship that was afloat at the time of its creation in September 1708, it was launched to sea for the first time on the 31st May, 1911. It cost over £1.5m to build, which would be over £100m in todays money. It was built by Harland and Wolff, who were based in Belfast, Northern Ireland.

It was, for many reasons, an engineering marvel. Capable of reaching speeds of 28mph at maximum, its incredible 822ft in length and displacement of 52,310 tons means that it was far beyond many other ships of the era.

As the second Olympic-class ocean liner that was operated by the White Star Line, it was built as a model of modern innovation and shipbuilding potential. The ship was designed by Thomas Andrews, and was captained by Captain Edward Smith. Sadly, both perished in the disaster. The ship, though mostly for the rich and the famous, also took many people from the UK and Ireland, as well as Scandinavia, across to the United States of America.

Onboard, the ship was like a mobile place. It contained everything from gymnasiums to swimming pools and cabins that would have made most home owners blush. However, the ship only contained around one third of the number of lifeboats needed to carry its entire capacity. Poor safety regulation at the time meant that the Titanic was still seen as suitably prepared for disaster.

The incident in question, then, stared on April 10th, 1912, when the Titanic arrived at Cherbourg, France and Queenstown, Ireland. At this point, it began to move the journey back to the USA, to New York. On the 14th April, though, the ship ran into an iceberg at around 11:40PM. With five of the sixteen watertight compartments soon buckling, the ship was one compartment over what it could actually handle. By 2:20AM, the ship was in ruins – many women and children were put onto boards, with the “women and children first” protocol for lifeboats put into action.

Around two hours after the sinking took place, the RMS Carpathia arrived, and was capable of taking around 705 survivors onboard. At the time of breaking apart, though, the ship contained well over 1,000 people. The ships destruction was a major blow to a thriving industry, but it brought about massive changes by the British and American governments with regards to maritime safety.

It also led to innovations in wireless communication, which would, in the future, save many more lives. The Titanic itself was wrecked and was never found again until 1985 during a routine United States military mission. Split in two, the ship is presently in a process of gradual disintegration as it sits at around 3,784m underwater. However, many artefacts and items have been recovered from the ship, with many museums around the world storing these instead of the ship itself.

The crushing nature of the story made sure that the Titanic became a major part of popular culture. Countless books, songs, movies and memorials have been created for what is the second largest ocean liner to ever sink. Only the HMHS Britannic can beat it – though the Titanic was in actual active service at the time of its sinking.

last survivor of the ship, Millvina Dean, who was just two-months old at the time, died in 2009, aged 97. It’s unlikely that the RMS Titanic will ever be lifted or recovered from its tragic resting place. Today, it serves as a reminder that even the strongest, most secure and most expensive vessels can be vulnerable.