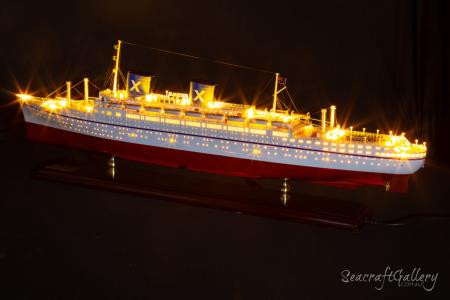 For Australia, the importance of naval transport has always been a crucial part of the nation’s development. From its key foundations to the massive importance of nautical transports today, there is a connection between country and community to the world of ships, boats, and vessels. However, across history, some ships have played a key role in the development of Australia as a major nation. One such ship that played a key role in this was the SS Australis.

If you would like to own a replica of the SS Australis, then we well a pristine recreation of this most famous of migrant ships. Pick it up today, and add it to your collection of top quality ships from the era and beyond. This 86cm SS Australis Ocean Liner handmade wooden ship model is a ideal gift for friends, colleagues or a great home decoration for those who find its history fascinating.

The history of the SS Australis

Like many post-Second World War ships, the SS Australis was a ship built with modern thinking and ideology. The ship itself is a major part of Australian migration history, and was capable of providing the largest post-war passenger capacity of any migrant ship built by the Australian government. The ship would regularly visit Australia and the ship, and its pristine, art-deco style, became revered among those who had spent time on this vessel.

Originally, the SS Australis was known as the America, and was designed by William Francis Gibbs. The ship was developed with the intention of being used in the North Atlantic trade, and was launched prior to the Second World War, launching on the 31st of August 1939. The ship itself was launched by Mrs Eleanor Roosevelt, and was noted as being the largest passenger vessel ever built by the Americans. Over 1,200 people could be part of the ship at any given time.

The ship was turned into a troop transport during the Second World War, upgraded to carry over 8,000 soldiers at any given time. It was renamed the USS West Point at this stage, too, with worries over public morale were a ship called America to be sunk.

During the wartime effort, it served across Europe, Africa, and in South America and was under regular attack by Axis forces. However, after the war, the ship survived and was used as part of the North Atlantic trade machine. In 1965, it was sold to the Chandris Line and was given its latter name, the Australis.

It was also converted into a fully air conditioned single-class ship, as opposed to the three-tiered class ship that it was previously. Much of the original design was retained, and many murals and additions were included to help further showcase the opulence of the ship.

For years, it played a key role in migrations from nations including Greece. The ship was a key part of the migrant ship fleet until 1960, when a fire broke out during a trip from New Zealand and Suva. The ship sustained major damaged, including damage to the ballrooms and cabins.

The ship eventually fell into Panamanian ownership and was renamed the Alferdoss. Sadly, in 1988, the SS Australis was run aground near Piraeus to stop the ship from being able to sink. Regardless of a somewhat inglorious end, the SS Australis retains huge interest from the naval community as one of the most important ships of its time.