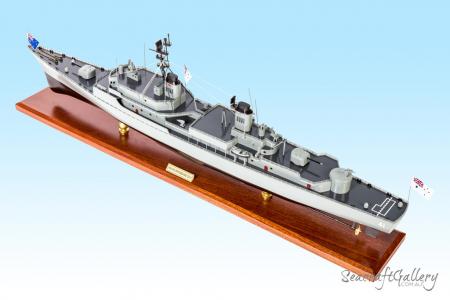 The HMAS Brisbane D41 Destroyer is a crucial part of Australian military history. This all-wood model has been built and designed from scratch to capture the real history of the D41 Destroyer. Enthusiasts of the sea and all ships/vessels should find a friend in the HMAS Brisbane D41 Destroyer. This high-class Destroyer-class ship has become a key part of modern history for sea warfare for Australia as a whole. This hand-crated model is designed to give you the ideal display point in any office, boardroom, or personal study. It’s the ideal gift for anyone from ex-Navy personnel to those with a love of all things nautical.

The HMAS Brisbane is a major part of the trio of Perth-class guided-missile destroyers built for the Royal Australian Navy. This US-designed ship was first laid down in Bay City, Michigan, in 1965. It was then launched in 1966 before being commissioned in 1967. It was named after the city of Brisbane, Australia. The ship itself enjoyed a storied career and served as a vital part of the Australian effort in Vietnam. Its major career in terms of military use involved the Vietnam War and Persian Gulf in the first Gulf War. The ship itself, dubbed the Steel Cat, was first launched in 1966. It lasted for over thirty years, with its lifespan going from commission in 1965 until decommission in 2001.

With a displacement of 3,370 tons at standard load, and a length of 133m, this was one of the most powerful seacrafts in the Australian Navy. The first major deployment for the ship came during the Vietnam War, when it was committed as part of the Australian effort to ending conflict in Vietnam. It was approved and entered into a series of supporting rules, including naval gunfire support, anti-infiltration protection, especially during Operation Market Time, and also escorting USN aircraft carriers.

Its second deployment came in 1971 when the Brisbane was put out to operate outside of Vietnam. It was then moved over to Military Region 4, before returning to Region 3. It took part in various duties, including escorting the USS Kitty Hawk. The ship was then set for a major re-fit during the year 1974, being refitted and upgraded after a period of refitting. It was then used to help with the disaster relief efforts that came after Cyclone Tracy, playing a major role in helping to assist in the rebuilding of the town of Darwin. After this, general usage began to fade. Instead, it helped out as part of Operation Damask, which was a major naval blockaded in 1990. It was used as art of this and then operated around the Southeast Asia region in the 1990s and early 2000s. Come 2001, though, the ship was in poor condition and it was decided that it would be turned into a dive wreck.