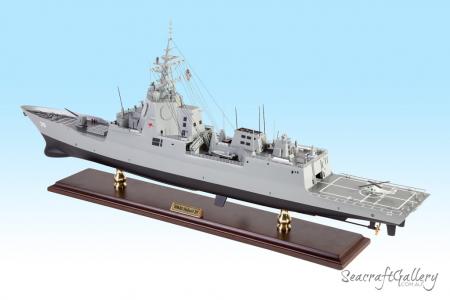 HMAS Hobart (DDG 39), named after the city of Hobart, Tasmania, is the lead ship of the Hobart-class air warfare destroyers used by the Royal Australian Navy (RAN). The ship, based on the Álvaro de Bazán-class frigate designed by Navantia, was built at ASC’s shipyard in Osborne, South Australia from modules fabricated by ASC, BAE Systems Australia in Victoria, and Forgacs Group in New South Wales. As a guided missile frigate, this was a long-range escort ship that specialised in providing sea-to-air defence, as well as being capable of both surface and undersea warfare capability.

If you would like to own a replica of this famous ship then we sell a top-class recreation of this most famous of Australian military vessels.

The history of the HMAS Hobart III (DDG 39)

HMAS Hobart (III) is the first of three ships of the Hobart Class guided missile destroyers. Her sister ships are HMAS Brisbane (III) and HMAS Sydney (V). The keel of Hobart was laid down on 6 September 2012 and the ship was launched on 23 May 2015. HMAS Hobart (III) commissioned on 23 September 2017.

Hobart is based on the Navantia designed F100 frigate and is coupled it with the Aegis Combat System. Hobart was constructed in Australia by the Air Warfare Destroyer Alliance.

Hobart provides air defence for accompanying ships in addition to land forces and infrastructure in coastal areas, and for self-protection against missiles and aircraft. The Aegis Combat System incorporating the state-of-the-art phased array radar, AN/SPY 1D(V), in combination with the SM-2 missile, provides Navy with an advanced air defence system capable of engaging enemy aircraft and missiles at ranges in excess of 150km.

Hobart will carry a helicopter for surveillance and response to support key warfare areas. The surface warfare function will include long range anti-ship missiles and a naval gun capable of firing extended range munitions in support of land forces.

These capabilities ensure that the Hobart Class guided missile destroyers have the layered defensive and offensive capability required to counter conventional and asymmetric threats.

HMAS Hobart was commissioned in a ceremony at Fleet Base East on 23 September 2017.