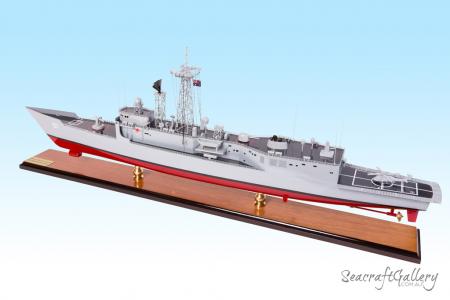 As one of the most important cities in Australia, Adelaide has had many parts of Australian Navy hardware named after it. However, chief among them is the HMAS Adelaide II. This hugely popular vessel was a long-range escort frigate that served a key role in air defence, anti-sub warfare, and interdiction. It was a key part of the Australian Royal Navy’s ability to intercept threats, combat them, and win. Indeed, it was designed to offer elite resistance to threats in the air, on the surface, and underneath the waves.

The History of the HMAS Adelaide

While the HMAS Adelaide II is an Australian frigate, it was designed and developed in the United States of America. It was commissioned on the 15th of November, 1980, and was to be the first of six Adelaide Class guided missile frigates to be developed. This was the first of the six to be delivered, and would be the second ship to carry the HMAS Adelaide name. The first ship served during the 1920s until 1945.

Taking on the name of this famous ship, the HMAS Adelaide II had a lot of history to live up to. However, alongside its five sister ships – including the Canberra II, Sydney, Darwin, Melbourne, and Newcastle, the HMAS Adelaide II was designed using gas turbines. This provided a different means of power, and was backed up with auxiliary propulsion systems so that it could move with ease even in tight and confined spaces.

The ship was also designed with a gluttony of sensors to ensure that it could capture potential threats in the air, on the surface, and underneath. It could even provide staff with target data via data link from other ships, allowing for even better communication between ships and thus improved warfare capability. It used a range of anti-missile and anti-ship solutions. The HMAS Adelaide II also had capability to carry two S-70B-2 Seahawk helicopters, and came with torpedo powers to combat submarines if needed.

The ship was part of the Gulf War in the 1990s, serving as a major part of the Australian input into the conflict. At the same time, it also served as a crucial part of peacekeeping efforts in East Timor at the end of the 1990s. From 2001-2004, the ship served as part of the Arabian Gulf War, working alongside other international allies to help preserve peace within the region.

Serving as a key part of operations such as Operation Catalyst, then, the HMAS Adelaide II made its mark on key operations that took part within its lifespan. The ship was originally intended to be paid off in November 2006, but delays ensured that it was not decommissioned until January 2008 at the HMAS Stirling. The ship was prepared for scuttling in early 2010, though protests to the intended scuttling ensured that the ship was not scuttled, creating a diving wreck, by April 2011. Today, it remains a hugely popular diving wreck and has played a huge role in driving diving-based tourism to the NSW region.