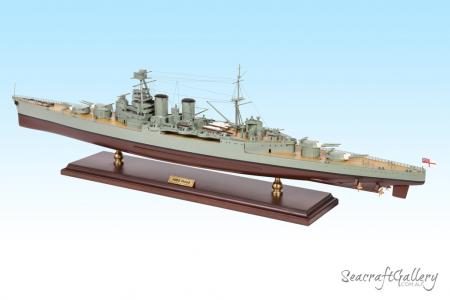 The British have long been regarded as ingenious when it comes to naval developments, and have been through much of recorded history. However, when it comes to 20th Century battle cruisers, few options stand out quite as much as the imperious HMS Hood. The HMS Hood was a battlecruiser that served as a major part of the Royal Navy, and the first of the Admiral-class battlecruisers intended to be developed during the First World War.

As one of the most important ships of the 20th Century for British naval development, the HMS Hood is a highly recognisable ship. Why not add one of Britain’s most famous battleships to your model collection with the help of this pristine model?

The HMS Hood was well-regarded from its earliest days as a vessel, and was under construction when the Battle of Jutland took place in 1916. This battle revealed some worrying flaws in the design and thus the ship was started again, rebuilt from the ground up to match up with the standard expected. This meant that it did not arrive on the scene until four years later – a major delay. For these reasons, the HMS Hood was the only one of the Admiral-class ships to be finished, as a new design was developed afterward.

This led many to assume the Hood would become a short-lived and expensive mistake. However, despite more modern ships arriving on the scene in the years to come, the Hood more than held its own and remained the largest-built warship in the world until the 1930s.

Regarded as the “the mighty Hood” by many in the navy, the vessel took place in various events. While it was mostly a flag-showing vessel until the breakout of the Second World War, it soon became a vital part of the military response to war breaking out. Beforehand, it had served as part of the Mediterranean Fleet following the outbreak of the Italo-Ethiopian War. It also played a role in the Spanish Civil War, returning to Britain in 1939 for upgrades and repairs.

In 1941, the ship was due to undergo repairs and upgrades but the severity of the war meant it served without the upgrades it was needed. The Hood mostly operated around areas like Iceland, though it also spent time hunting German ships and dealing with blockade runners. The Hood played a role in scoring a memorable victory for the Allies when it took on the German cruiser and battleship duo, the Prinz Eugen and the Bismarck. However, the battle was a costly one for the Hood itself; though eventually victorious, the ship was sunk just moments into the battle.

Its previous invincibility tag was no longer applicable, which had a detrimental impact on the morale of the British forces. Given the fact the ship was destroyed so quickly, reports and commissions took place to try and work out what, exactly, had gone wrong with this most important of vessels.

The wreckage of the ship was discovered in 2001, and it was found that magazine detonation as German shells and torpedoes pierced the armour had caused the ship to sink without so much as a proper fighting response. Though it met a rather inglorious end, the Hood was well-regarded for many years, before and after the sinking, as an example of British development and quality.