View cart “HMS Hood Battleship Model 100cm” has been added to your cart. 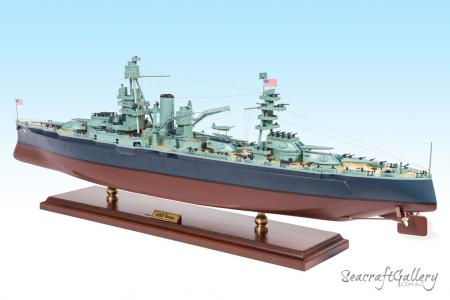 Wartime vessels tend to hold a very special place in the hearts of those who serve. These are often the vessels that play a role in helping to turn the tide not only of singular battles but entire wars. With that in mind, then, many Americans still hold the Texas II battleship in extremely high regard. From 1914 until 1948, it served with distinction and honour as part of a US naval system that was, for many, the envy of the world.

Our replica model of the Texas II would make the perfect addition to any collections that you might be building at this moment in time. Few vessels in history can stand out quite like the Texas II for its significant achievements. Therefore, why not show off this reverent ship in all of its glory using one of our display cases?

The Texas II was a major warship of the era, and took part in various wars from 1914 until it was decommissioned. Indeed, it was a major player in the Mexican seas as it was a major part of the Tampico incident, and also played a considerably role during the First World War. Though its sorties during this war were less notable, during the Second World War it was a legend of the wartime era.

Indeed, it played a key role as an escort ship for war convoys that would make their way across the Atlantic. It also played a role in North Africa, when it shelled Nazi beaches – it also helped out during the Normandy Landings, when it would have provided shelling support from the waves. In the Pacific Theatre, though, the Texas II played a significant role in helping to turn the tide of battles like the battles that took place in Iwo Jima and Okinawa.

In 1948, the ship was finally decommissioned after having served with valour across major battles for decades. Indeed, it was given five battle stars during the Second World War, and today it stands as a popular museum ship in Houston, Texas.

Though it might not have served for as long as other ships of the era in terms of being on the frontlines, the longevity of the Texas II has to be mired. It was a major vessel that was capable of fighting well above its typical size and stature, taking on vessels on the Axis powers side that would have been favoured before the fighting began.

However, it was a technological marvel in that it was among the first US ships to be given a production radar. It was also provided with anti-aircraft guns, which were essential in stopping boats from being destroyed during the land, air, and sea battles taking place during the Second World War. It was also the first US ship to be given controlled gunfire with directors and range-keepers. So, in terms of ship development, the Texas II was used to help develop the technology being used across the wider US Navy for many years to come.